The stars are no longer out of reach. Google Maps lets you travel to planets, moons and the International Space Station

Google Maps has introduced the ultimate way to go armchair travelling, with a chance to explore 17 different planets and moons around our Solar System.

You can walk on the moon, have a nose around the International Space Station or jet off light years away to Pluto.

While Mars was already up on the site to be explored, the latest images have come from a spacecraft called Cassini which launched 20 years ago on a mission to uncover the secrets of Saturn and its many moons. It sent back nearly half a million pictures, and you can now explore these on Google Maps.

How to explore space with Google Maps

First of all you need to go to Google Maps for Space at this URL -  https://www.google.com/maps/space/ - to find this home page.

Then using the menu on the left hand side you can pick which part of the galaxy you wish to discover. The options are: Mercury, Venus, Earth, International Space Station, Moon, Mars, Ceres, Io, Europa, Ganymede, Mimas, Enceladus, Dione, Rhea, Titan, Iapetus and Pluto.

To zoom in and out use the + and - button in the bottom righthand corner, and for full 3D press Ctrl and mouse drag, which is only available for the International Space Station. 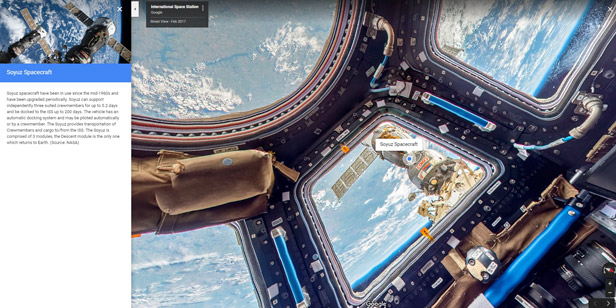 If you click on the International Space Station tab you can explore where what an astronaut’s home looks like, as well as enjoying the views out of the window.

Use your mouse to move in 360 degrees and see if you can spot the Soyuz Spacecraft. Once you do, click on the grey dot to find out more about the entry and departure vessel that can support three astronauts for up to 5.2 days.

One famous English inhabitant of a Soyuz was Tim Peake, and his capsule is now on tour throughout the country.

[Read more: Descend to earth with Tim Peake in a Soyuz spacecraft] 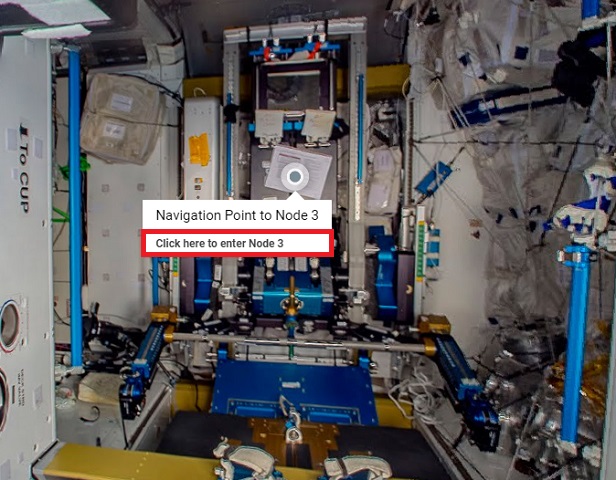 Move about the cabin to find the Navigation Point to Node 3 and click on the Click Here to enter Node 3 link below the grey dot. Moving into the living quarters you can see how the International Space Station crew exercise, go to the toilet, store their food and go to sleep.

Remember this is a small space so every nook and cranny is used, including the ceiling, leaving you free to explore every inch of the ship!

If you ever get lost and want to go back to the beginning, just click the grey arrow in the top left hand corner.

Pluto might be as far as 7.5 billion kilometres from the Earth, but Google Maps lets you get there in seconds to explore the dwarf planet and find out what its parts are called. To see Pluto, scroll down until you find Pluto on the left-hand menu and then click on it.

By clicking along the image see if you can find out which part has been named after a famous British mountaineer and which English poet’s visions are also celebrated.

On its epic voyage, Cassini discovered water beneath the icy plains of Enceladus, the sixth largest moon of Saturn, suggesting signs of life.

To see it click Enceladus in the left hand menu. If you click on the names you can discover a bit more behind their origin, for example Aladdin.

Another of Saturn’s moons, Titan, has been mapped and you can dive beneath the thick cloud to discover more about the largest moon of this planet and see its methane lakes. 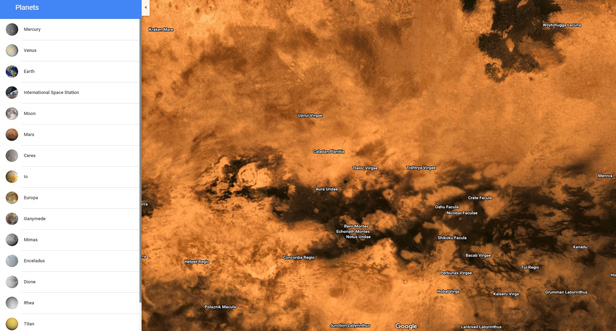 [Read more: 8 of the strangest sightings on Google Maps]