From flying in a fighter jet to discovering mysterious ruins: 10 reasons to love Google Earth

We take a look at some of the best features of the free mapping program that lets you explore the world.

Google Earth is a mapping project based on satellite imagery that shows 3D terrain and 3D buildings around the world. When combined with Google Local search, it can help you discover a treasure trove of local information.

It's a tremendous resource, allowing you to visit places around the world, from Timbuktu via Easter Island or Hawaii. You can take in the scenery and get a snapshot of life without leaving your home.

How to get Google Earth

Google Earth is available as a desktop download at http://www.google.com/earth/download/ge/agree.html

It’s also available as a free app for Android and Apple devices.

Check out the video above to find out how to use Google Earth on your iPad.

Since Google Earth launched in 2005, Google has added more features and places. Here are our top 10 highlights.

1. Get your explorer’s hat on

Many of its features are also available via Google Maps, but to get the full experience we recommend using the desktop download. 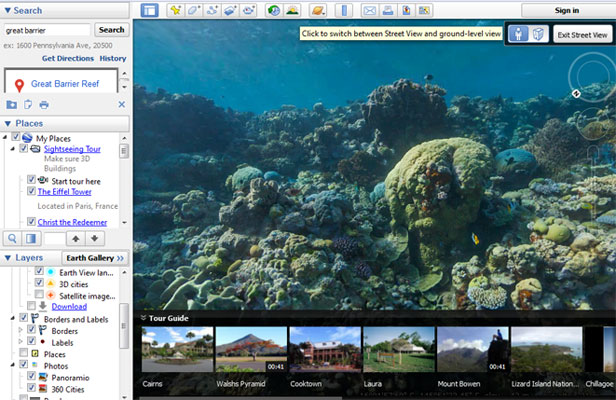 On the desktop version using the menu on the left you can turn layers on and off.

Each layer contains specific information, such as borders or trees, or shows you where extra information (such as photos) is available.

Navigate using the controls at the top left.

We recommend spending a bit of time getting used to the interface – then dive in!

A layer called ’Voyager’ is available on the desktop version of the program. It's designed to make navigation easier.

Voyager uses colours to showcase the different sections of Google Earth – Street View, Earth View, 3D Cities and Satellite – so you can see exactly what imagery is available for a specific location. 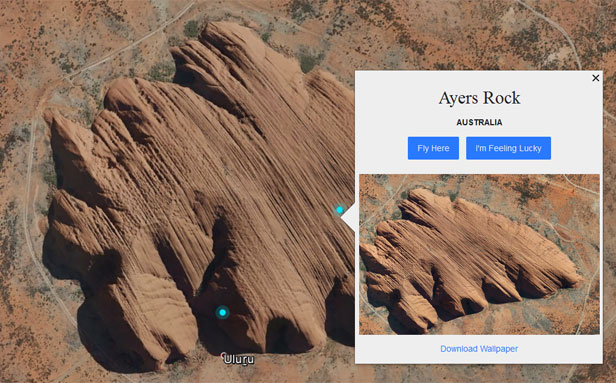 For example in the picture above showing Uluru, the blue dots signify Earth View landscapes areas that are available to look at.

Earth View comprises striking landscapes photographed from space, such as the Hamman Marshes in Iran (below), showcasing the unusual patterns and textures of Earth. 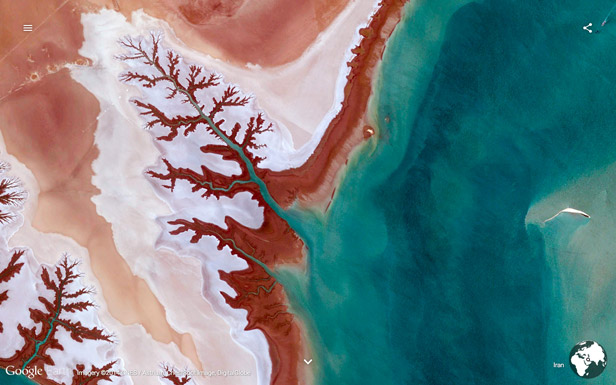 Google has released 1500 of these, available to view at Earth View. Click the left menu and select Download Wallpaper to use as a background wallpaper or print out. 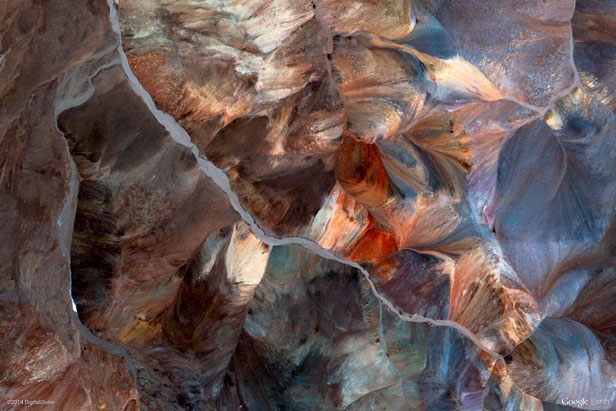 With Street View treks, Google sent its cameras out to photograph some of the most amazing and challenging treks in the word, places out of reach for the average human. You can climb the notorious El Capitan rock face in Yosemite, trek through the Khumbu valleys in Nepal or swim around the Great Barrier Reef, for example. And all without leaving your lounge. 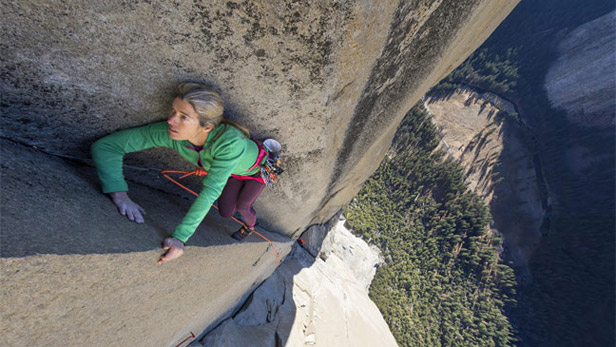 You can also check out safer, more tourist friendly destinations like Venice or the Eiffel Tower.

Using Google Earth (or Google Maps) it’s possible to visit a city – such as Paris – zoom in to the satellite map and see key landmarks such as the Eiffel Tower in 3D. 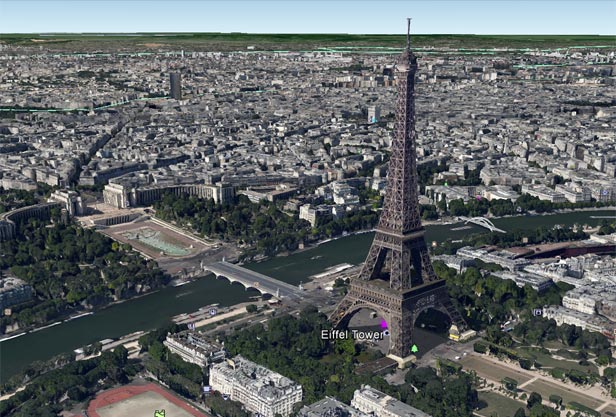 In the UK dozens of cities have been mapped in 3D, including London, Liverpool, Manchester and Cardiff.

It’s not just Earth you can explore. Google Earth allows you to visit the Moon, Mars and explore the night sky. 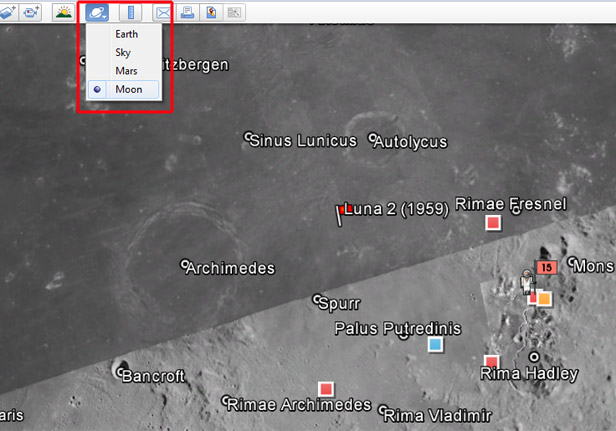 Within the Google Earth desktop application click the planet icon on the top menu bar and click Moon. You can view photographs of structures and visit landing sites and watch movies.

Google welcomes user contributions, allowing you to upload photographs from locations around the world. 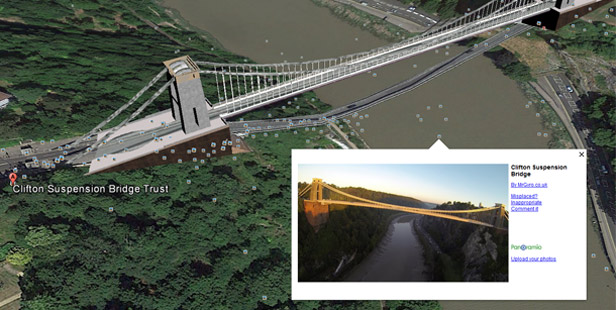 With the ‘Photos’ layer ticked, available photos are shown as tiny photo frames, each one a photo you can click and view.

A neat and fun tool of Google Earth is the ability to fly around the world in an aeroplane. 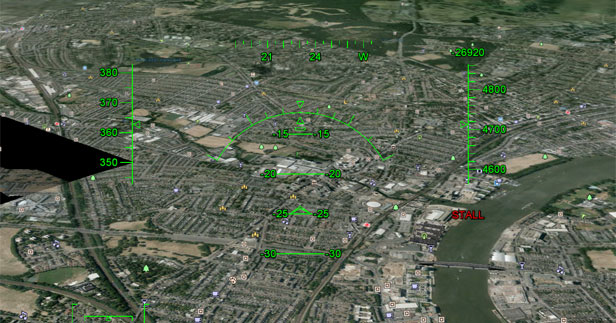 In the Desktop version click Tools – Enter Flight Simulator and choose either a F-16 jet fighter or SR22 propeller airplane.

Use the arrow controls to pilot your plane around Google Earth. Make sure you don’t crash!

Google Earth has proved a source of discoveries that can only be seen from the air – many by regular people with a keen eye and computer. These include: 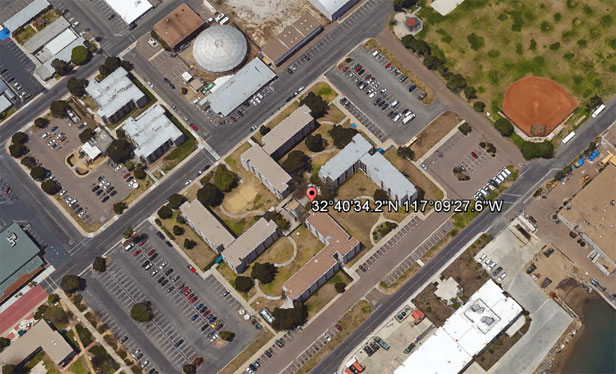 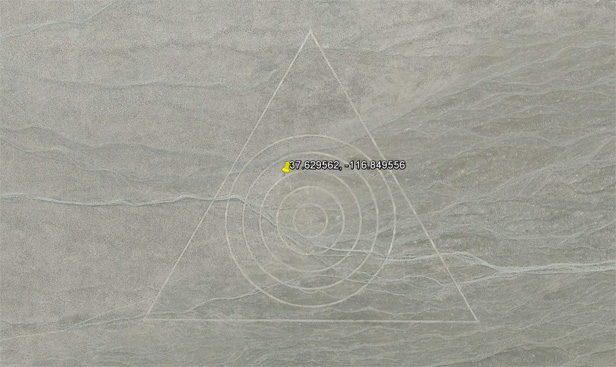 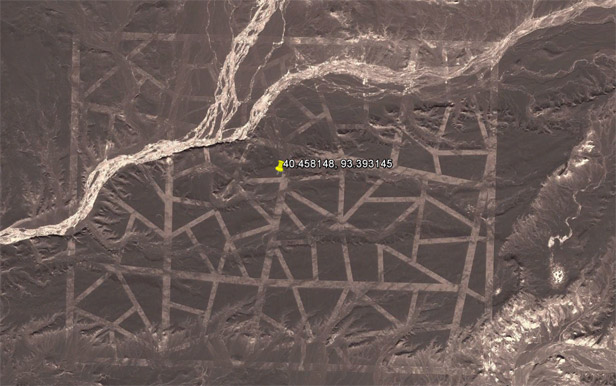 This software used to cost over £200, but it’s now free to download from Google.

To find out more, check out our guide: Google Earth Pro is now free – here are four reasons you should download it.