When buttons replaced the dial: Introduction of the push-button phone

We may take them for granted today, but the introduction of these new telephones was met with a mixed reaction.

Do you remember the rotary dial telephone? Today, the process of dialling a number using one of these phones seems long-winded, but when the push-button phone was finally introduced, it actually took a while for it to catch on.

It was November 18, 1963 when the world’s first push-button phones were installed in Carnegie and Greensburg, Pennsylvania. Customers needed to be convinced to use the new phones, introduced by Bell Telephone, after decades of using the rotary dial method. You can see in the video below that Bell had an interactive display at the Seattle World’s Fair in 1963, explaining the advantages.

In the UK, the Post Office (BT’s predecessor) noted in its Telecoms Journal in November 1960 that push-button telephones were being studied. The Postmaster General agreed that the system would cut the amount of time needed to dial, but that the existing electro-mechanical switching system would not speed up the time for connecting calls and the extra equipment needed at exchanges would increase operational costs.

In the article, writer W.J.E. Tobin explained: “Push-button devices are, of course, quicker to operate than the dial which is the standard device over the whole world at present, but it does not follow that calls would be connected more quickly, as this is determined basically by the type of switching equipment used in the exchanges and the type of signalling equipment used between exchanges on multi-link calls.

“This exchange and signalling equipment exists in large quantities in any country that is reasonably well developed telephonically, and much depends on its nature whether it is economic or practical to make modifications to take advantage of the possibilities of push-button sending.” 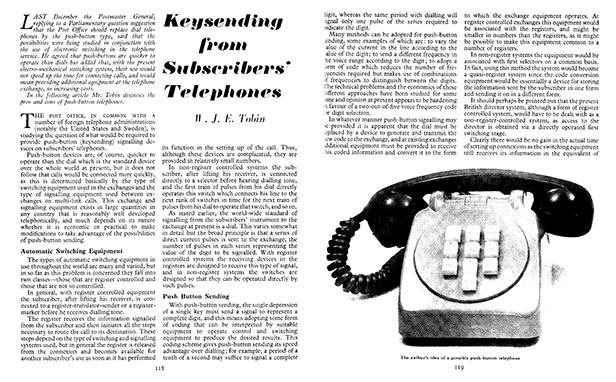 The tone phone was also a new development. Developed in the US by Bell in the 1950s, it meant that two simultaneous tones were sent to the exchange to represent the key pressed – and the tones only needed to be applied for milliseconds. With the rotary dial system, a number of electrical pulses were sent to the exchange and it took a whole second to pulse dial ‘0’. Early keyphones also merely stored the numbers before sending them on more slowly, at least until the local exchange was converted to digital. Tone phones allowed for additional features such as Caller Return, Caller Display, Reminder Call, Call Waiting, Three-way Calling, Call Diversion, Call Barring, Call Minder and Call Sign.

It wasn’t really until the 1980s that the push-button phone was a common sight in homes in the US and the UK.

We trialled push-button phones in the UK in 1965. Some were available in 1972, but they weren’t generally introduced until 1975.

In the summer 1972 edition of the Telecoms Journal, author M.T. Bark noted the following about this technological innovation: “Its simple touch action has a number of advantages over the rotating dial. It can be used with less effort and is very much faster to operate, making it easier for long STD numbers and even longer international (ISD) numbers to be keyed before the fallible human memory has forgotten them.  This should reduce the risk of 'dialling' error, one of the most common causes of misrouted calls.

“Key phones have been described as the 'phones of the future', and later versions will be ideally suited for operating to the fast switching systems to be brought into service towards the end of the seventies. Eventually it may completely replace the dial telephone.” 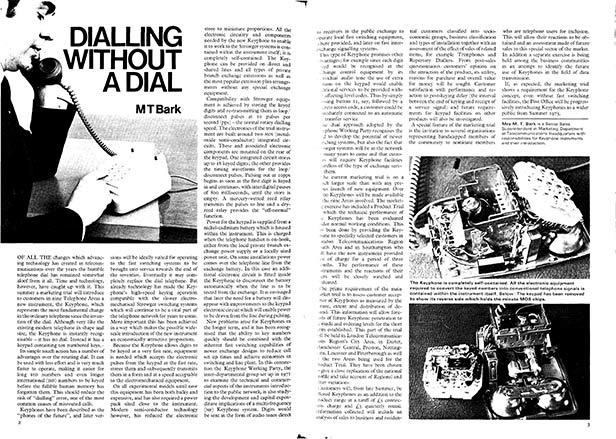 Read more: The amazing history of the telephone

Take a look at the push-button phone in the UK through the decades in the picture gallery below from BT Archives.