Downloading music vs streaming music: Which is best for you?

The way we listen to music has changed, with a move away from physical CDs to digital and streaming services on our tablets, smartphones and computers.

The future of music is digital, that much is clear. But opinion is divided over just what's the best way to get music digitally.

At the start of the 21st century, music downloads proliferated, but now streaming services have become more popular.

[Read more: Streaming explained - what is it and how does it work?]

Both streaming and downloads have their advantages, but which is right for you?

Check out the video above to find out more.

What’s the difference between downloading and streaming?

Downloading music from Amazon, Google Play or iTunes means the file is transferred directly to your device and stored there. Once it is stored, you don’t need to be connected to the internet in order to listen to it. You will pay a fee per song or per album and it’s then yours to transfer to other devices as you wish.

Streaming music is different because you don’t actually own the tracks. You listen over the internet, either through wi-fi or mobile data. Most services offer a free option (with ad support and/or metered listening), while pushing you towards a premium tier that offers ad-free, unlimited access to libraries of 20m plus songs and the ability to store music for offline listening. Of course, you'll have to pay for this premium tier - prices usually start around £10 a month.

So which is best for you? Answer the questions below to find out.

Where do you do most of your listening?

If you do the majority of listening in the home setting, then streaming music is worry-free thanks to your broadband connection. For mobile listeners there are other factors to consider. Wi-fi isn’t yet omnipresent and most of us have limited mobile data allowances - exceed yours, and it could prove costly.

However, there is a silver lining. Subscription streaming services like Spotify allow you to store up to 3,000 tracks as offline playlists, meaning they take up residence on your device and won’t require an internet connection to play.

Lounge listeners can get their fill with BT Music, a bolt-on service that's offered to all BT TV subscribers. It costs just £4 a month, and you can add it by clicking here.

Do you have limited hard-drive space?

The quality of digital music files has improved hugely over the years, which means each file now takes up more storage space on your hard-drive. As it’s almost impossible to locally store a large music library, many of us have turned to streaming, even if we own the music in question. This approach appeals because you can access millions of tracks within a few clicks without having to store them all.

Do you prefer to ‘own’ your music?

The concept of owning music in the digital era is a strange one because there is no physical product. When it comes down to it, you press play and the song comes on regardless of whether you’ve downloaded or are streaming it. However, some folks still like to own the music they listen to, even if it is in digital form. If this is you, then downloading is the best option. Streaming music can make it a little, shall we say, disposable.

Thanks to streaming. It’s possible to enjoy an awful lot of music without handing over a penny. Spotify has a free tier that allows full, ad-funded access to music on desktop and limited access on mobile. 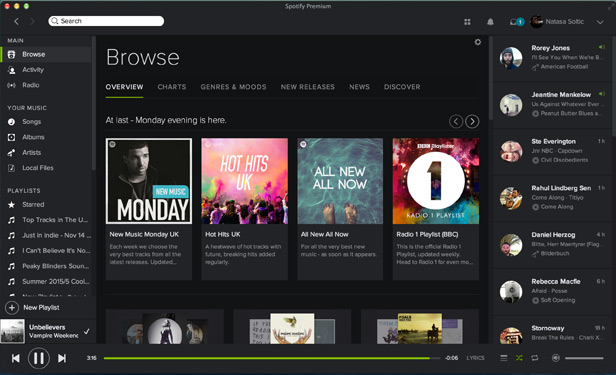 However for £10 a month (the price of buying one album), you can get premium access to these services. This means there are no adverts, you get access to offline playlists and you can play whichever tracks you like (the free tier doesn't let you choose the order in which songs play).

Downloading albums generally works out about the same as buying a physical CD, so most folks will probably limit their expenditure to one a week at most.

Remember when you had to buy an entire album for one song? Thankfully downloads and streaming have put those days to rest. However, if you’re really into discovering as much new music as possible, streaming services win this category hands down. With powerful recommendations engines based on listening habits, social integration, publicly accessible playlists, gigantic catalogues and the ability to listen to an album before buying it, streaming is a great music discovery tool.

[Read more: How to transfer music to your smartphone]

If you’re an audiophile, then standard digital music (streamed or downloaded) is never going to cut it. Both iTunes and Spotify files are compressed meaning the quality pales in comparison to, say, a CD.

As it stands, there’s not that much to choose between iTunes downloads and Spotify streams in terms of quality. So a lot will depend on your hardware choices. However, streamed music can suffer from connectivity issues meaning occasional buffering and interruption. Also, streaming at the top quality uses much more mobile data.

Right now, there’s a movement for higher quality music, although it’s very much in its infancy. Tidal offers ‘Lossless’ high fidelity-quality music for £19.99 a month (double the price of a normal subscription), while websites like HDTracks.com offer ‘high resolution’ downloads at around double the cost of a standard album. You’ll need great hardware in order to hear this difference too.

If you’re a Beatles maniac, a sucker for Taylor Swift or can’t resist a little toe-tapping to AC/DC, a 100 per cent reliance on streaming services might not cut it.

Some artists have withheld their music from streaming services because of the lower revenue they earn (see below). This means you might have to buy the albums from download services or import your CDs (which is now legal) in order to listen to them digitally. Also, if you’re into rarities, like live concerts, acoustic sessions, bootlegs, B-Sides, etc. from your favourite artists then you may have to download these too.

Do you care about the artists' cut?

There are also ethical considerations to this debate. Streaming services are continually under fire for the lower royalties paid to artists. Spotify pays as little as $0.006p per stream to artists, which is before other ‘rights holders’ take a cut. So, in some cases 100,000 plays would get the artist less than £400.

While the top, top artists are now bringing in greater revenue through Spotify in Europe this can be attributed to falling download sales and countless millions of streaming plays. Smaller artists feel like they might as well give their music away - even Ed Sheeran once got a £4 royalty check from Spotify.

Spotify argues that 70% of its total revenues goes back to artists and points out that streaming has become an alternative to illegal downloading, which earned artists nothing at all. The music is now more accessible to more people meaning merchandise and tour sales go way up. One of the propositions of Jay-Z's Tidal service is to ensure more money for artists.

With downloads, artists get around 10 per cent of the cut, so when you buy an album you can feel better about directly rewarding them for their efforts.

Downloading allows you to own the music and listen without worrying about whether you can connect to the internet or whether you’re using too much data. It also gives artists a larger slice of the pie.

On the other hand, streaming services allow you to listen to more music at a lower cost (often free!), and discover new and interesting music without dipping further into your pocket. It also ends the need to store music files on your devices. Mobile users can also play music offline by storing playlists through a streaming service.

[Read more: BT Music: What is it and how to get the most out of it?]