What is NFC? Forget cash, the contactless future is on tap now

NFC is the convenient way to pay for goods using your smartphone instead of cash or cards. Here’s everything you need to know about this new technology.

In a few years' time it may seem very strange to pay for goods using cash, or even by slotting a credit card into a reader.

Instead we could all be buying things simply by holding our phones near a reader. The change to contactless payment isn’t that hard to imagine: in 2015, only 45.1 per cent of transactions were carried out using cash, while contactless payments using cards and NFC-enabled smartphones took up a high proportion of the rest.

[Read more: Gadgets that save you money]

NFC (or Near Field Communication, to give it its full title) is a wireless technology that can transfer small pieces of data over very short distances between two devices.

In order for NFC to work, the devices that communicate with each other both need to have an NFC chip.

It is low-powered and even works with unpowered devices via NFC tags – microchips which transfer small amounts of data to NFC-enabled devices such as your smartphone.

How does NFC work? 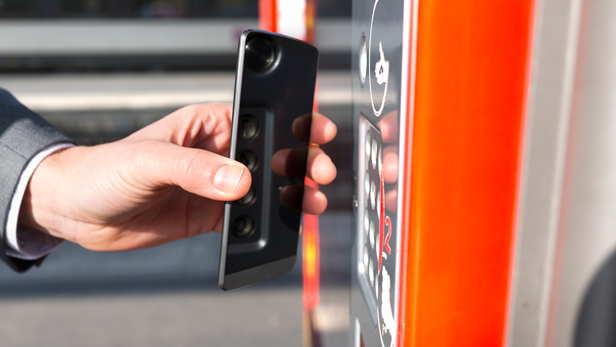 NFC connections always have an initiator – usually your phone – and a target.

The clever thing about the technology is that the target doesn't have to be powered. This means that companies can, for example, add an unpowered NFC tag to an advertising board, or put them in our bank cards and work IDs.

When you bring your phone close to these tags it emits a magnetic induction field (a bit like wireless charging, but very, very low power) that's enough to start up the tag. It then transfers the data – such as a money-off voucher – to your phone.

Technically NFC can have a range of up to 10cm, but typically the NFC chips built into phones work within just a few millimetres. You don't need to wave your card or phone at the NFC reader - in fact that might slow down the connection if they move out of range and have to start again.

NFC can also be used for two-way communication, such as transferring pictures back and forth between two phones. It doesn’t provide a very fast link as it's limited to a max speed of 424kbits per second – around 600 times slower than wi-fi - but it is an easy way start up a faster link like Bluetooth or direct Wi-fi.

What is NFC used for? 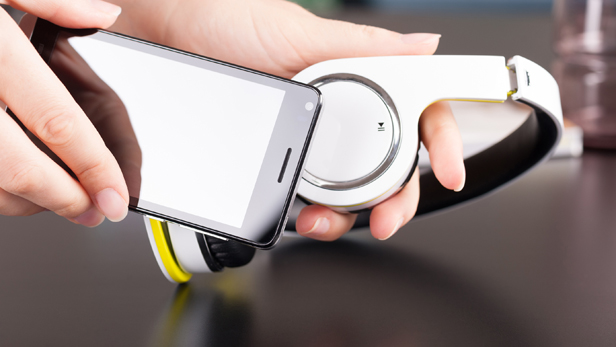 For the most part, NFC is associated with mobile payments. People can add their debit card details into their NFC-compatible phones and pay for items by tapping their handsets on in-store payment terminals.

Outdoor advertising company Clear Channel has added NFC to some of its smaller UK billboards for brands like KFC, so people can touch their NFC phone against the advert to find their nearest KFC restaurant.

NFC is also integrated into some Bluetooth speaker docks. The Q Acoustics M2 Soundbase  has an NFC tag onboard so you can quickly pair an NFC-compatible phone with the dock just by holding the phone over the tag. The music then plays wirelessly over Bluetooth.

Headphone manufacturers are getting in on the action too. You can pair an NFC-compatible phone with Sony MDR-ZX330BT cans (Amazon), for example, just by tapping the phone against the headphones.

Can I use NFC to pay for goods on my phone?

Your smartphone will have to meet a number of requirements – for starters it must have NFC built-in. Not all phones have it, but most do.

Your bank will also have to be a member of the payment system. In the UK most banks are. They'll come through either Android Pay and Apple Pay.

Does my phone have NFC?

Most Android phones sold since late 2014 have included NFC, and there are very few that don't have it today - Google Pixel 2, Huawei, Samsung, and Sony phones all have NFC.