Why do we use QWERTY keyboards and what does QWERTY mean?

The fascinating story behind why our keyboards are laid out this way.

We use our keyboards so much nowadays, most of us don’t give them a second glance. Yet the key layout is bizarre. Why do the first six letters spell QWERTY? It makes no sense. But as you’ll see, there’s a method to the madness…

[Read more: Know your QWERTY from your AZERTY? Challenge yourself to our international keyboard quiz]

The man responsible was Christopher Sholes. Sholes was a Milwaukee port official, Wisconsin senator, and newspaper editor. The first typewriter he invented bore the keys in alphabetical order, but the type bars clashed, so he was forced to rearrange them.

Why QWERTY? According to Sholes’ calculations, it was the order that was the slowest to type with. When people typed too quickly, it caused the typewriter to jam. The only way to prevent this was to slow the typists down. Which is exactly what Sholes set about doing, with the seemingly nonsensical QWERTY arrangement.

However, some disagree with this theory. They point out the letters T and H are positioned near each other, and seeing as the two are frequently used together in words, it couldn’t be an effort to slow typists down.

Others say the layout originated with telegraph operators - the people tasked with taking down Morse code. Proponents of this theory claim that the first typewriters were created specifically for this purpose, and were made with the QWERTY layout based on the operators’ advice. 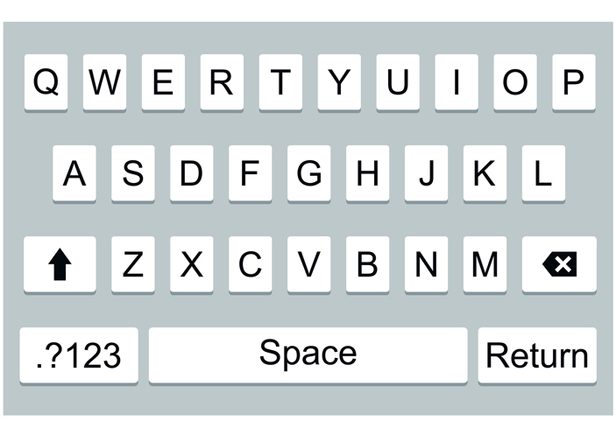 What’s not in doubt is that there are much quicker ways to type. The KALQ keyboard for smartphones, for example, splits the keyboard into two halves, and has you typing using only your thumbs. It also groups commonly combined letters together to save time travelling across the keyboard to reach them. The layout allows both hands to work alternately, which also saves time. The orientation can even be reversed for left-handed people.

It’s not the only keyboard to be split in half. Some physical keyboards are too. Called split keyboards, or convertible keyboards, they’re designed to make typing more comfortable – but they usually keep the QWERTY layout.

[Read more: From the writing machine to the computer keyboard – the evolution of the typewriter]

Better the devil you know

Other key configurations might be quicker to type with, but the problem is we’re all so used to QWERTY now, learning another method would feel like a huge task.

Think of stenotypes. These are the typing machines used by courtroom stenographers. They have only 22 keys, but are capable of speeds of up to 180 words per minute – that’s three every second. Which is about as quickly as humans can speak.

We could all use them and type considerably faster. But stenography is much trickier to learn than a standard QWERTY keyboard. And it has a steep learning curve. And that’s before we consider the upheaval of replacing every QWERTY keyboard in the world, making them all compatible, and the cost – in terms of money and time – of teaching every typist in the world how to use them.

Like it or lump it, it seems the QWERTY keyboard is here to stay.

Read more: How can I speed up my typing? 6 ways to help improve your computer keyboard skills