The history of the telephone: Six pioneers who transformed the world of communications

On March 10, 1876, Alexander Graham Bell made the first telephone call, ushering in a new era of communications. But was the phone all his own work?

While Scotsman Alexander Graham Bell receives much of the historical credit for inventing the telephone, there are a few others who have legitimate claims to having pioneered the innovation that would change the world. Here are their stories…

[Read more: Alexander Graham Bell and the history of the telephone] 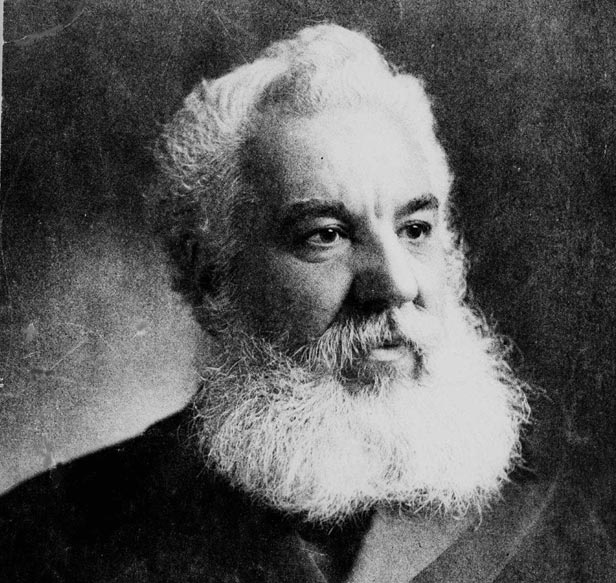 The Scottish-born inventor is largely credited with spawning the era of voice communications. On March 10, 1876, he famously made the first recognised phone call to his assistant in an adjacent room, uttering the words: "Mr. Watson, come here, I want you."

Bell’s patents spread far and wide, including in the UK where he set up The Telephone Company Ltd in 1878 as a rival to BT’s forerunner, the GPO’s telegraph network. Of course, the UK’s telephone network would eventually be nationalised, coming under Post Office control in 1911. In the United States, Bell’s company lives on as the gigantic phone, internet and TV provider called AT&T. 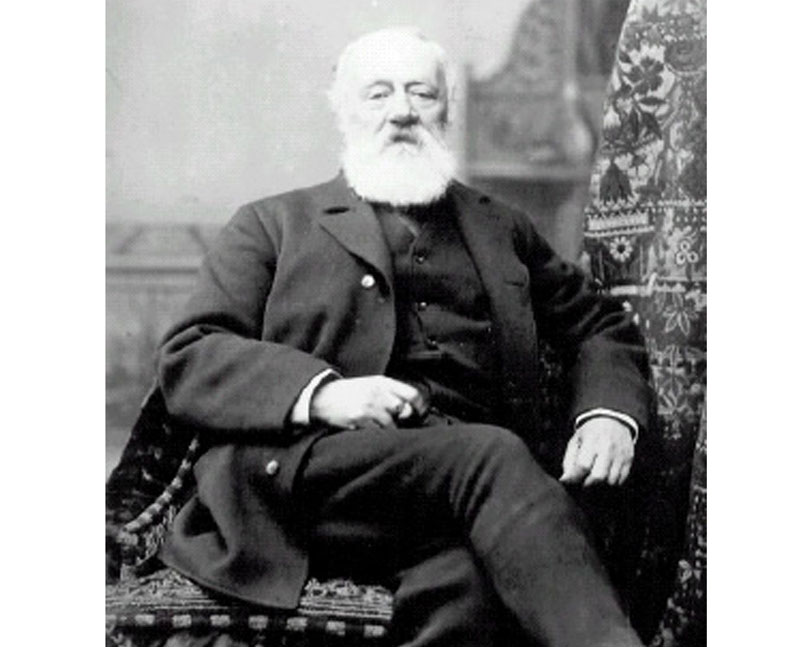 Bell’s claim to the invention has been disputed since he filed the patent in 1876. In Italy, Antonio Meucci is known as “the official inventor of the telephone”, something that’s was recognised by the US Congress in 2002, 113 years after his death.

Meucci began developing a ‘talking telegraph’ as far back as 1849 and had developed a working device by 1860.

He filed a caveat patent (because he couldn’t afford the $250 for a full patent) on his invention in 1871, but, poverty stricken, he was unable to renew it.

Meucci tried to strike a deal with Western Union who ‘lost his equipment’ and went on to sign an accord with Bell two years later. Meucci sued, but died penniless before the case was concluded. 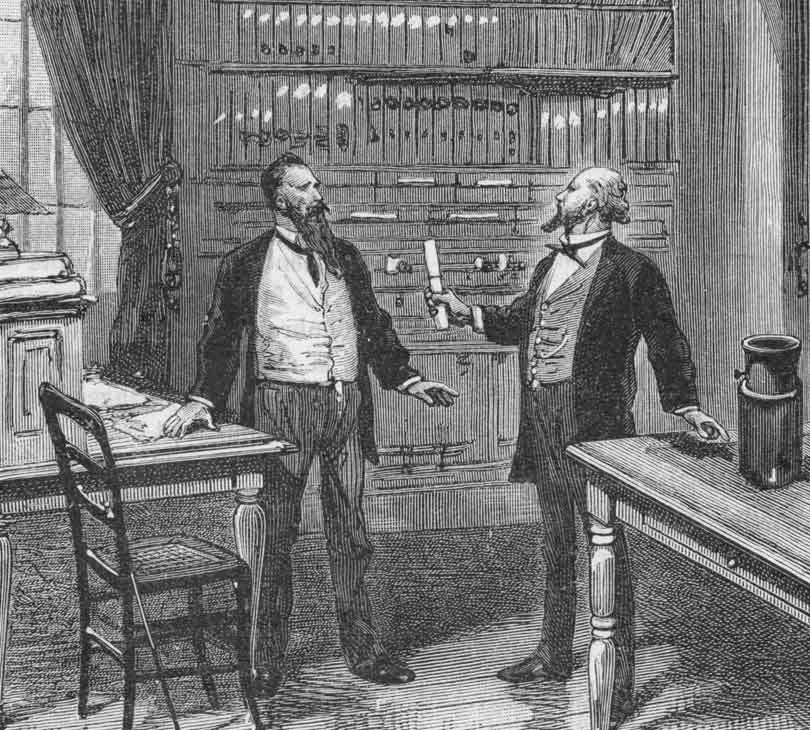 Another man with a legitimate claim to Bell's place in history is Elisha Gray, whose case is still argued to this day.

He said Bell had piggybacked on his innovations in order to create the working telephone. He claimed to have developed, built and demonstrated the liquid transmitter and the electromagnetic metal-diaphragm also used in Bell’s phones.

Gray applied a caveat patent ("Transmitting Vocal Sounds Telegraphically") within hours of Bell’s filing (as the 1890 engraving above shows), laying claim to the invention. However, after a lengthy legal battle, Bell was awarded the patent in 1878. ­­­­­­­­ 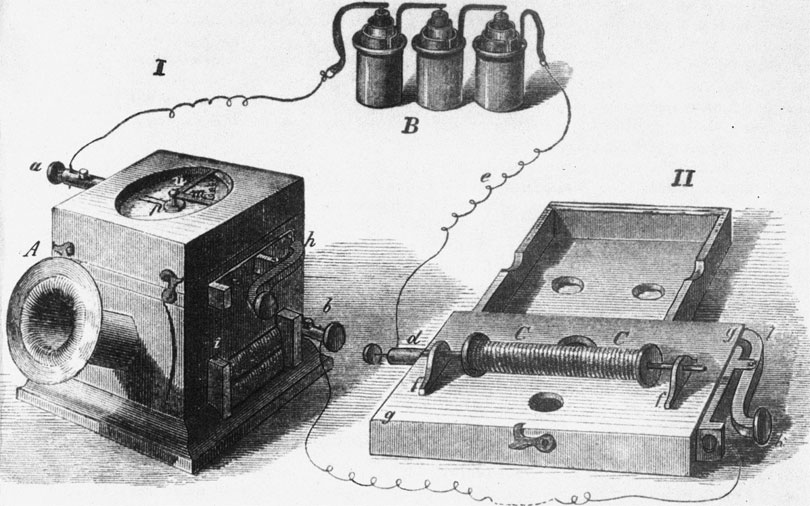 German inventor Reis was the first to coin the term telephone (telefon). Working from the theories of French telegraphist M. Charles Bourseil, he set about creating a device to transmit sound using a diaphragm to “make or break” an electric current. Reis was demonstrated this speech transmission with very limited success as far back as 1861.

One of the first Reis telephones was constructed using a large wooden ear (carved out of a beer barrel) as a transmitter, a sausage skin as a diaphragm and a strip of platinum to create the current. However, his invention was an unreliable transmitter of speech and fared better with music. That would leave the door open for Bell, who created a much more robust working solution.

[Read more: History of communication in the UK] 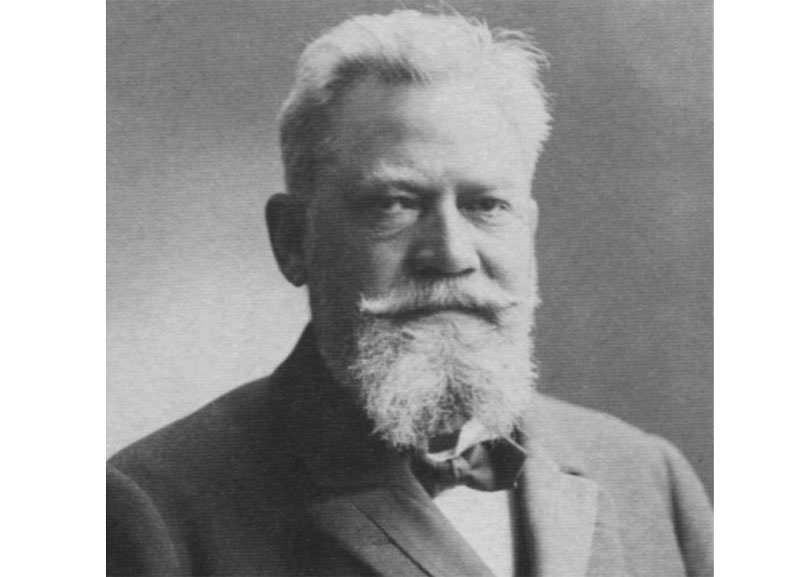 The first telephone to combine the receiver and the mouthpiece into a single ‘handset’ was invented by Anton Avén and Leonard Lundqvist, who effectively joined the two components together with string and a wooden handle. Swedish innovator Ericsson adopted their idea in 1884 and designed and marketed the first such telephone.

The invention would spread quickly around the world (including at the GPO), save for America where people persisted with the two-part approach. Ericsson and the company that bears his would play an integral role in the proliferation of telecommunications throughout the 20th century. He also helped to design the first widely used telephone exchanges. 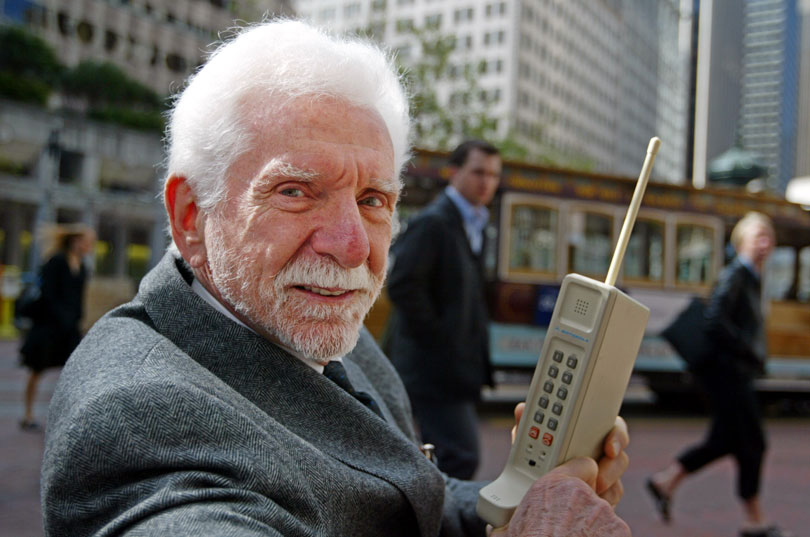 While the likes of Bell, Meucci and Ericsson got the world talking through technology, it was American inventor Martin Cooper who gave us the freedom to do it whenever and wherever we wanted.

While at Motorola, Cooper invented the first cell phone and played a major role in bringing it to market a decade later. The first call from a mobile phone was made in 1973, when Cooper called a rival executive at AT&T (Bell’s company), which was focusing on car phones.

“We knew that someday everybody would have a [cell] phone, but it was hard to imagine that that would happen in my lifetime,” Cooper told CNN back in 2010.