What is 4K and what is a 4K TV? Everything you need to know about the high-resolution TV format

4K is the latest standard in television picture quality, bringing more lifelike pictures and helping you feel a part of the action. Discover more about 4K TV.

Television technology is advancing all the time and as picture and sound quality improves, we’re getting closer to being able to enjoy a cinema experience in our own homes.

As far as picture quality is concerned, the high-resolution, high-definition images offered by 4K TV is the best generally available in our homes.  We answer the key questions you might have about 4K.

When referring to the type of television you can buy, the terms 4K, UHD, Ultra HD and Ultra High Definition are all used, but when it comes to the TV technology, they all mean the same thing - that the television has a resolution of 3840x2160 pixels.

Confusingly, manufacturers are using their own terminology for the same standard. Sony refers to its TV range as ‘4K Ultra HD’, Samsung as ‘UHD’, LG as ‘Super UHD 4K’ and Panasonic as ‘4K Ultra HD’ – yet all have the same resolution of 3840x2160 pixels.

What is a 4K television?

Your TV picture is made up of lots of tiny dots called pixels that combined to create an image. The pixels are in a grid made of vertical and horizontal lines.

Over time as technology has changed, the number of pixels that make up our TV screens – and thus the resolution - has increased. The higher the resolution the better the picture quality. 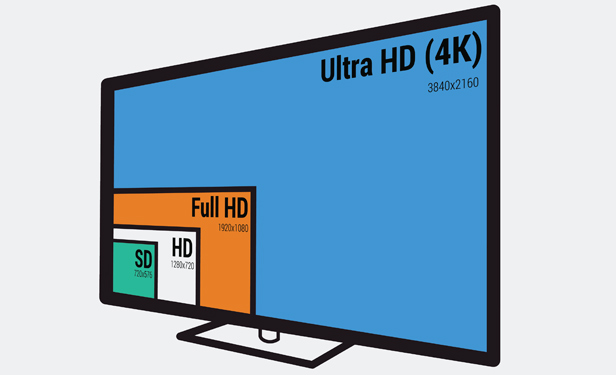 In order for a television to be classified 4K or Ultra HD, it needs to have a resolution of 3840x2160 pixels.

What is 4K resolution?

4K resolution refers to the number of horizontal and vertical pixels that make up the picture.

[Read more: TV speakers: Which are the best around?]

What is Cinema 4K?

Some cinemas show movies in 4K. This is different to the 4K/Ultra HD resolution you can get on your home television set because the images have slightly more pixels.

They have 4096 (instead of 3840) × 2160 lines - a standard determined by the Digital Cinema Initiatives organisation.

A High Definition TV has a resolution of 1920x1080 pixels: 1920 horizontal lines and 1080 vertical lines.  This means there are around 2 million pixels on screen.

What is BT Sport Ultra HD?

In order to watch it you need a subscription to BT TV with the Total Entertainment package, which includes the 4K-ready YouView+ Ultra HD set-top box and a 4K/Ultra HD TV.

The BT Shop sells a range of 4K/Ultra HDTV sets as do Amazon and John Lewis.

Read more in our article: Breakthroughs in TV technology which have changed the way we watch