Hannah Bouckley visits Kenya to explore the country and visit some of the world's poorest children with Compassion UK.

What comes into your head when you think of Kenya? Lake Victoria and Mount Kilimanjaro; novels by Hemingway and wildlife from films like Born Free, perhaps.

But there’s a very different side of Kenya that few tourists see and one that I was going to experience as part of a ‘Muskathlon' organised by 4M UK in partnership with Compassion UK.

Compassion UK is a Christian charity that aims to lift children out of poverty via long-term sponsorship. Monthly donations help meet their educational and health needs, with the aim of empowering them to develop beyond their circumstances. To date over 1.8 million children around the world have been helped by Compassion projects.

Muskathlons are open to anyone, but for many of the participants on the trip I was going on, a visit to Kenya was an opportunity to meet the children they had been sponsoring and to see first-hand the difference their money had made.

During the eight-day trip we’d visit Compassion projects in Nairobi’s slums and in Northern rural communities near Lake Baringo, before undertaking a running, cycling or walking challenge through the Kenyan countryside – the Muskathlon.

Going away solo with strangers in the middle of your life (I’m in my late 30s), to a country far away makes this trip very different from a conventional holiday. Holiday is definitely the wrong word – a Muskathlon is an eye-opening experience that challenges you mentally and physically, as I was to find out.

Sprawling, humid and shrouded in heavy, grey smog, Nairobi is city of contrasts. Modern apartments which house the wealthy urban elite are a few minutes' drive down hole-ridden roads from the extreme poverty of the slums.

Home to over 500,000 people, the Mathere slums are the second largest in the capital. People live packed together in corrugated iron shacks, facing poor living conditions and crime.

An estimated 77-80% of residents In the slum are said to live in poverty, and the conditions are indeed shocking. What hits you first is the smell: the air is heavy with cooking meat, poor sanitation and, in the background, the sweet sickly smell of Changaa, the potent alcoholic drink said to cause hallucination and death.

As we passed children playing in the mud, I was reminded of my son, who is not much older but who by simple fluke of birth lives a very different life. Some children stare, some smile, others look away, but most are curious and want to shake hands with the visitors.

A sliver of hope among the poverty is the Outreach Community Church. Every Saturday some 250 children, supported by Compassion UK and wearing matching tracksuits, are educated, can play and get a hot meal. Since it opened in 2005, more than 10,000 children have gone through the programme. 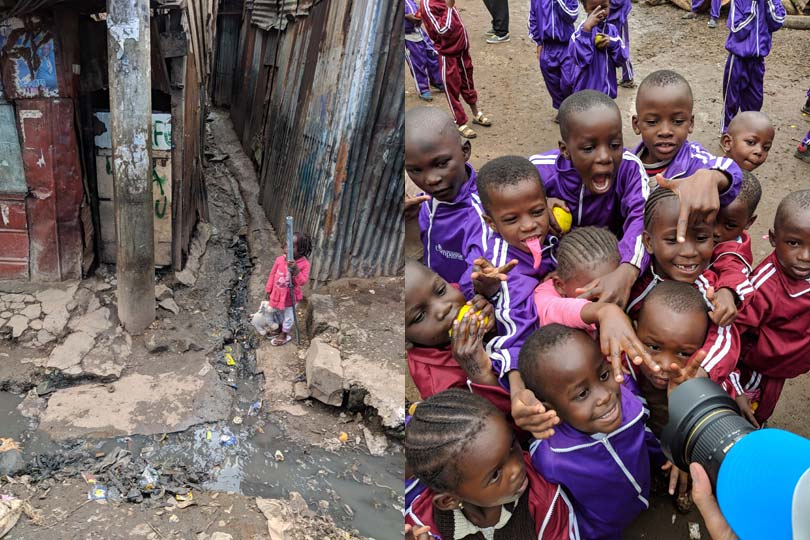 It’s impossible for Compassion to help the over 300 million children who live in poverty globally, so the charity relies on local church workers to find suitable children. One such child is five-year old Mary Kananu, a smiling, friendly girl, totally unafraid of a group of strangers, who likes dancing and drawing.

As a sponsored child in the Compassion scheme, Mary gets a better standard of education and food packages, and more importantly better healthcare: in 2016 she contracted cholera and would have died if Compassion hadn’t paid her medical bills.

We visited Mary’s house in the slum. At 10ft square, it's smaller than the average British living room. A large single bed, bought by her sponsor, sits on a dirt floor but has made a significant difference to their lives: Mary, her parents and four siblings all used to sleep on the floor, but because it flooded in rainy seasons, families had to spend the night standing up.

Like many of the inhabitants of the slum, Mary’s mother Jene Kananu had to find her own employment. She runs a vegetable stall connected to the house, getting up at 5am to travel 15km in a tuktuk to buy vegetables to sell to locals. She earns around $3 a day for her efforts – the family's rent is $90 a month.

We asked Jene what hopes she has for her children: and she said it was that they follow their studies and go to university. Her own dream is to buy her own place.

Lake Baringo and the community projects

Having seen Compassion projects in the south of the country, it was time to visit the country projects.

We travelled by minibus to Lake Baringo in the northwest of the country, the 10-hour journey proving ample opportunity to find out about our fellow passengers, who were people of all ages, from all over the UK, the majority of whom were travelling solo.

The grey sky of Nairobi gave way to the greenery of the Rift Valley, sunshine and blue sky and even a chance for a photo opportunity on the Equator.

We stayed at the Lake Baringo Safari Lodge, which looked a movie set complete with resident ostriches that roamed around. Hippos were in the lake and we were advised not to venture far at night because of crocodiles. Like our accommodation in Nairobi, it was simple, but comfortable and clean.

We took the bus to a project located in the Rift Valley, which had been in the Compassion partnership since 2017, arriving to an amazing greeting of dozens of children - in yellow Compassion-bought T-shirts - teachers and parents singing to us.

200 children are currently in the project – and 180 more are on the waiting list. The area has a poverty index of 1% and many of the children were malnourished before they joined the project.

During a tour of the project we saw including classrooms, crops and a new toilet block, which was bought with money from Compassion and was something the children had never seen before. 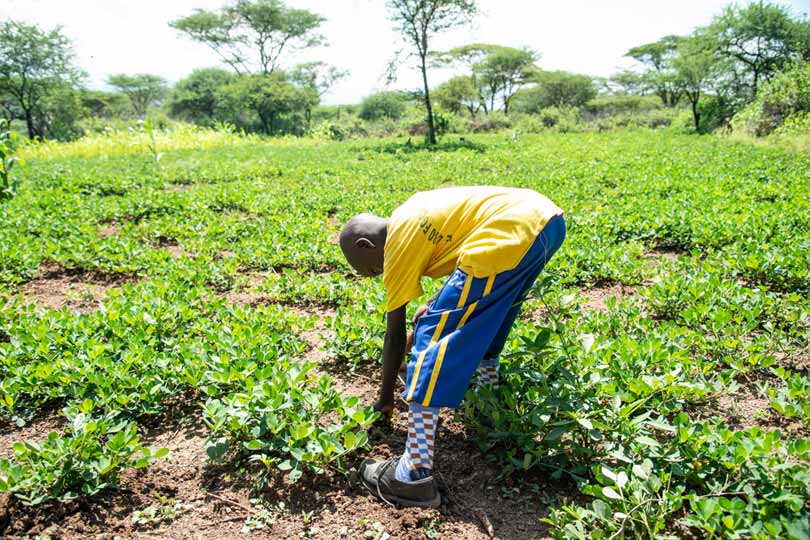 As in Nairobi, we had the chance to visit a Compassion-sponsored child. Kelvin (above) lives with his two siblings and parents who live smallholding  a 30-minute walk away.

With land for growing millet and maize for food and rearing chicken, the family are pretty self-sufficient. Kelvin’s job is to weed the family field – which was the size of an average UK garden – and sweep.

While the project was undoubtedly safer than Nairobi with its level of crime, it was a world away from Mary’s home in the slum. With the relentless sun beating down, reliance on the land for food and lack of clean water (which is collected from the roof or directly from the river) it’s different side of extreme poverty many children face in Kenya.

What sets this trip apart from other charitable trips is the physical challenge – the Muskathlon. On the penultimate day in Lake Baringo everyone walked or ran a half marathon, marathon or ultra marathon, or cycled 93 miles.

I run regularly, so was confident I could complete the distance, but racing in 30C degree heat, in a strange country, was a challenge you aren't prepared for. This brought a real sense of camaraderie within the group, shared worry about the heat, the distance, dehydration and getting lost.

Running in the Muskathlon along dirt tracks, with dust and rising temperatures was tough. Some choose to run together and others (like myself) were alone and there were times when I couldn’t see anyone in front or behind me, but seeing the sun rise while running through the Rift Valley was unforgettable.

At various points, schoolchildren, some of whom had been through Compassion’s programme, ran alongside me. The route was well marked, with regular water and fuel stops and the Impact organisers made regular loops in the van to check on us.

Crossing the finish line felt amazing, but the next few hours proved even more rewarding, as one-by-one my fellow Muskathletes crossed the finish line, some alone, some together, some fit, some struggling, but everyone cheering each other on, having shared so much over the previous week.

The focus of the trip was the projects and Compassion’s work. There was a trip on Lake Barango to spot crocodiles, hippos and some of the lake’s stunning bird life, as well as a visit to an island on the lake and its residents who had been forced to make a living there following wars on the mainland.

A highlight of the trip was talking to the other Muskathletes and sharing the day’s experiences - I met people I want to stay in touch with for years. We were all affected by the poverty. Many had sponsored children through Compassion UK for years, had written letters and sent presents and could finally meet their children and see the life-changing difference their money had made.

A Muskathlon is the experience of a lifetime and I would recommened it to anyone. It was tough - more mentally than physically - but I came away with a love for Kenya and with my eyes open to child poverty, but with the overwhelming feeling that it is possible to make a difference.

Compassion UK and 4MUK are organising a Muskathlon to Rwanda in 2019, which costs £899 plus flights and sponsorship.