Russia scored another first in the Space Race when cosmonaut Major Yuri Gagarin orbited the Earth in his Vostok spacecraft and returned a global hero.

The Soviet Union claimed a significant victory in the Space Race on this day in 1961 when its cosmonaut Yuri Gagarin became the first man to orbit the Earth.

As his Vostok spacecraft took off from a launchpad in Kazakhstan to take him on his historic journey, Major Gagarin was heard to shout out Poyekhali! (“Let's go!”). His flight lasted 108 minutes during which he travelled at speeds of up to 17,000 miles per hour.

Soviet news agency Tass announced the successful completion of the mission and said that the nation’s leader Nikita Khrushchev had congratulated Gagarin, telling him: "The flight made by you opens up a new page in the history of mankind in its conquest of space."

Gagarin, 27, had been selected along with 19 other pilots for astronaut training, beating thousands of other hopefuls. The 20 trainee cosmonauts were tested for physical and psychological endurance as well as training for the space flight itself. 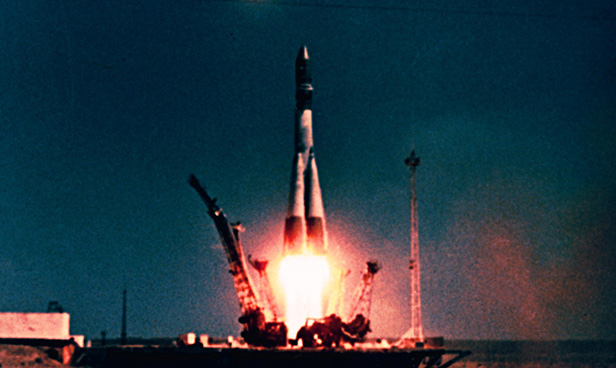 His successful mission quelled fears that humans would not be able to survive in space, and made Gagarin an icon both in his own country, where he was given the title Hero of the Soviet Union, in the Eastern Bloc and further afield.

He made tours of countries including Italy, Germany, Canada, Brazil, Japan, Egypt and Finland, and flew to the United Kingdom to make appearances in London and Manchester, where he was greeted by cheering crowds.

Though disappointed to be beaten into space, America’s reaction to Gagarin’s flight was generous; President Kennedy congratulated the Soviet Union on its achievement. Just three weeks later the US would launch its first manned sub-orbital space flight, piloted by Alan Shepard.

[July 21, 1969: Neil Armstrong takes 'giant leap for mankind' onto surface of the Moon]

Yuri Gagarin - Did you know?
Print this story
Back to top