April 13, 1997: Tiger Woods becomes youngest ever US Masters champion at 21

A prodigious performance at Augusta saw Tiger Woods become the first black man to win a golf major – and by a record margin.

Eldrick 'Tiger' Woods announced his arrival on the professional golf stage by winning the US Masters in Augusta, aged just 21 years, on this day in 1997.

Woods became the youngest man to win the title, and the first black man to ever win a major, with a tournament record score of 270 – 18 shots under par. His winning margin was an incredible 12 strokes - three more than the previous record, held by Jack Nicklaus.

Woods had only turned professional in August 1996, not long after winning his third consecutive US Amateur Championship. He had already attracted sponsorship and endorsements worth $60 million, such was his profile and the expectation around him.

After a slow start and an unimpressive first nine holes, he pulled himself back into contention and by the end of the second day’s play, he was at the top of the leader board – a position he would not relinquish. 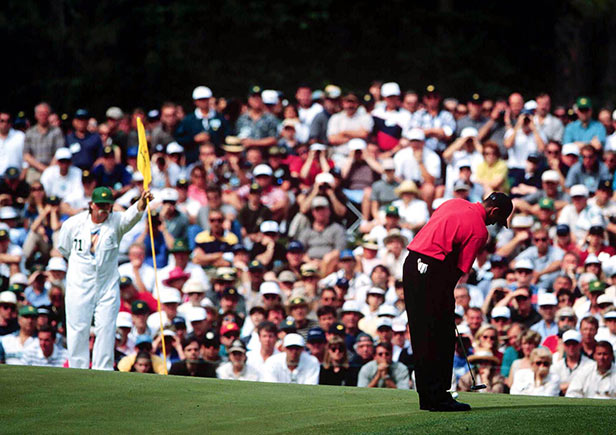 He soon tripled his lead from three to nine strokes on the Saturday, and though eventual runner-up Tom Kite clawed back some of the deficit early on the final day, Woods was far enough ahead for his last round to largely be a procession.

Speaking after receiving the coveted green jacket from previous winner Nick Faldo, the young champion said: “I never thought I would have a lead like I did… you envision duelling it out with Nicklaus or Watson or Faldo, but never to do it in the fashion I did."

Former champion and record-holder Nicklaus could only marvel at Woods’ abilities. "He's more dominant over the guys he's playing against than I ever was over the ones I played against", said the 18-time major winner. "He's so long, he reduces the course to nothing. Absolutely nothing."

Tiger Woods - Did you know?
Print this story
Back to top