A milkshake-mixer salesman added a dash of ambition into the hamburger recipe of two Californian brothers and took McDonald's on its first step towards global success.

A fast food revolution took place in the Chicago suburb of Des Plaines on this day in 1955, when Ray Kroc, a seller of milkshake machines, opened his first franchise McDonald’s restaurant.

The restaurant, which offered a simple menu of hamburgers, cheeseburgers, fries and a selection of drinks for a few cents an item, wasn’t the first McDonald’s - brothers Maurice and Richard McDonald has opened their first burger bar, McDonald’s Bar-B-Q, in San Bernardino, California, in 1940. But it was Kroc’s vision that turned the brothers’ parochial ambitions into a country-wide, and later global, success story.

Curious as to why the McDonalds needed eight of his milkshake machines in their popular San Bernardino restaurant (pictured below), 52-year-old Kroc paid a visit and, seeing the efficient assembly line (dubbed the ‘Speedee Service System’) that they had created in their kitchen, suggested to the brothers that they roll out franchised eateries on a national scale. 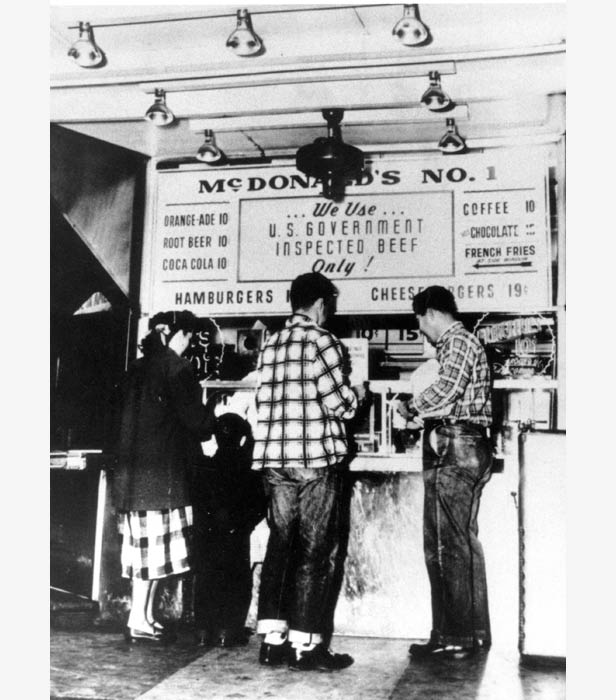 Seeing their reluctance to expand, Kroc offered to manage the franchise system throughout the US, except in the McDonalds’ established bases of California and Arizona, and the brothers were to receive one-half of 1% of gross sales in return.

After opening the Des Plaines restaurant (pictured below on its opening night), Kroc set up the company that later became today’s McDonald’s Corporation and sought franchisees across the US. By 1958 there were 34 restaurants, and by 1959 the number was up to 102. 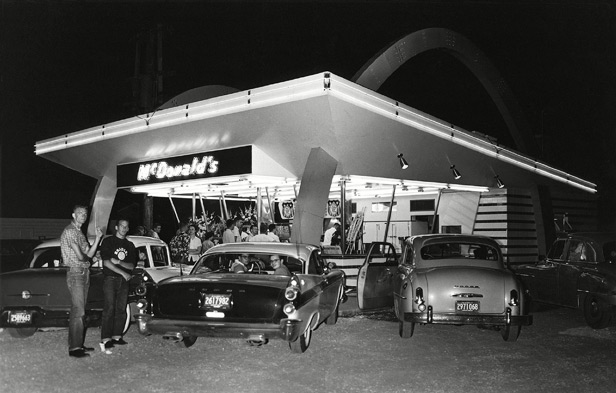 Kroc wanted every burger to taste the same in every McDonald’s restaurant, and set strict rules for franchisees governing portion sizes, cooking methods and packaging. One rule said that fries had to be precisely 0.28 inches thick, and that exactly 10 patties had to be made from each pound of beef.

With takings buoyed by the increase in car usage in the US, in 1961 Kroc bought out the McDonald brothers for $2.7 million, and in 1963, the company sold its millionth hamburger and introduced Ronald McDonald. The Golden Arches logo, a large ‘M’ based on Richard McDonald’s original design, followed in 1968, the same year that the Big Mac first appeared on the menu.

The Des Plaines restaurant was demolished in 1984 – also the year of Kroc’s death - but a replica of the original eatery is now a McDonald’s museum.

McDonald's - Did you know?