Nineteen children were among the 168 people killed when Timothy McVeigh and Terry Nichols detonated a massive truck bomb outside federal offices.

The worst ever act of domestic terrorism perpetrated in the United States happened on this day in 1995, when a massive bomb hidden in a rented truck was detonated outside the Alfred P. Murrah Federal Building in Oklahoma City.

As recalled in the video above, the explosion tore the front third off the nine-story building, collapsing internal floors and killing scores who worked there. Such was the force of the blast, another 324 buildings and 86 cars were destroyed or seriously damaged in a 16-block radius.

Emergency services were soon swarming around the area, which resembled a war zone. When the rescue and clean-up operation ended two weeks later, 168 people were confirmed dead – including 19 children, 14 of whom had been in the building’s day care centre.

The FBI’s investigation into the bombing started almost immediately.  Two days later, an eyewitness description of the man who had hired the van led investigators to Timothy McVeigh, 33, an ex-soldier with links to survivalists and white supremacists.

Remarkably, McVeigh (pictured below) was already in custody; he had been pulled over by an Oklahoma State Trooper only 90 minutes after the bombing as his getaway car was missing a licence plate; he was arrested for possession of a concealed weapon. 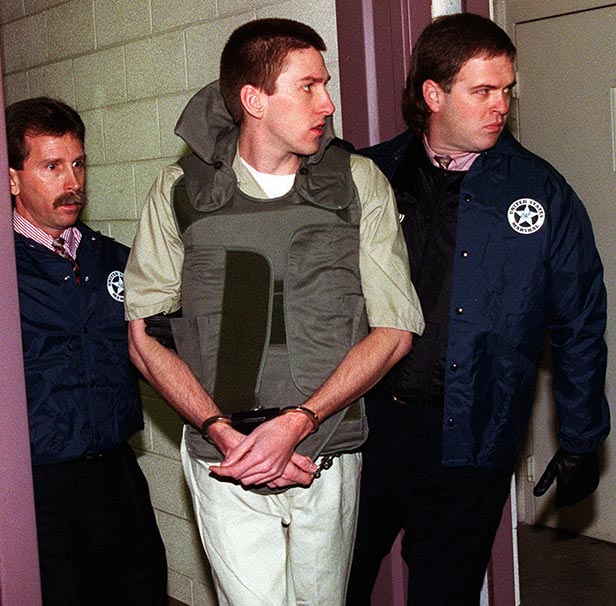 McVeigh and his co-conspirator Terry Nichols, another Iraq War veteran, had carried out the bombing against the government building in retaliation for the bloody end to the siege of the Branch Davidian cult compound in Waco, Texas, two years earlier.

McVeigh was convicted of murder after a two-month trial. He was executed at Terre Haute federal prison in Indiana on June 11, 2001. Nichols was also found guilty in federal and state courts, and is serving 161 consecutive life sentences in a high-security prison.

The Oklahoma bombing – Did you know?
Print this story
Back to top