August 9, 1979: Britain’s first nudist beach gets the go-ahead in Brighton despite objections

Britain's naturists could barely contain themselves when a small stretch of pebbled coastline was declared the country's first nudist beach on this day in 1979.

Black Rock beach – which lies approximately one mile to the east of Brighton Pier – had already been an unofficial favourite of nudists. But in 1979, it officially became a public naturist beach, the first of its kind in Britain.

The Central Council for British Naturism had been petitioning 140 local councils to allocate sections of their beaches to nudists – and it was councillor Ellen Jakes, a 47-year-old seafront landlady, who fought the cause in Brighton. She even showed her fellow councillors photographs of herself sunbathing topless on a beach in Ibiza in an effort to persuade them.

Jakes faced strong opposition from the ‘No’ campaign, however. “What distresses me is that people naively believe what is good for the Continent is good for Britain,” said Tory councillor John Blackman. “I personally have no objection to people showing their breasts and bosoms and general genitalia to each other. Jolly good luck to them. But for heaven's sake, go somewhere a little more private.” 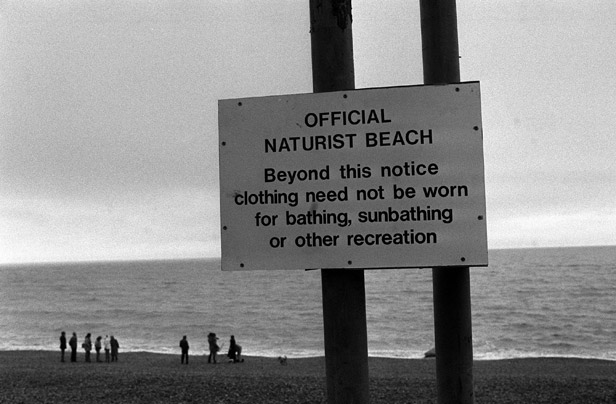 The 59-strong Tory council finally voted ‘Yes’. “It is a bold move,” said Brighton's deputy Mayor Alfred Feld, “but we feel we are just moving with the times. It is a fairly secluded stretch of beach and I don't think it will be offensive to anyone.”

Locals and visiting naturists then had to wait eight months, however, as the council made sure that there were enough signs in place to warn more sensitive members of the public.

The naturist beach finally opened to the public on April 1, 1980 – and despite a threat by Conservative councillors to close it in 1983, calling it “a disgrace to the town”, it remains open to this day.

British naturists - Did you know?

• The earliest known naturist club was established in British India in 1891 by Charles Edward Gordon Crawford, a judge for the Bombay Civil Service.
• There are four million self-described naturists in the UK.
• The first British naturist club was formed in Wickford, Essex, in 1924 and called itself the ‘Moonella Group’. It even got a mention in series five of Downton Abbey.
• Public nudity on a beach is not illegal in Spain or Denmark (except for two beaches). Nudity is also not illegal in Germany – although it can be regulated by local authorities for health and safety, not morality, issues.
• The abbreviation ‘FKK’ is widely used throughout Europe as meaning naturist – it stands for the German word Freikörperkultur, which means 'free body culture’.
• British Naturism is the official naturist organisation in the UK. They describe naturism is “a lifestyle in harmony with nature, expressed through social nudity, and characterised by self-respect of people with different opinions and of the environment.”