Britain and mainland Europe were connected for the first time since the Ice Age when workers from France and the UK broke through the final few metres of rock.

On December 1, 1990, construction workers from Britain and France drilled though the final section of rock between them to join the two halves of the Channel Tunnel and meet under the English Channel.

Drilling into the final half-metre of wall began at 11am, and before long French worker Philippe Cozette and Briton Graham Fagg were able to shake hands and exchange their nations' flags through the gap.

After the breakthrough, a French party drove through the tunnel to Folkestone, Kent to have their passports stamped, while a British group walked to Calais to do the same. 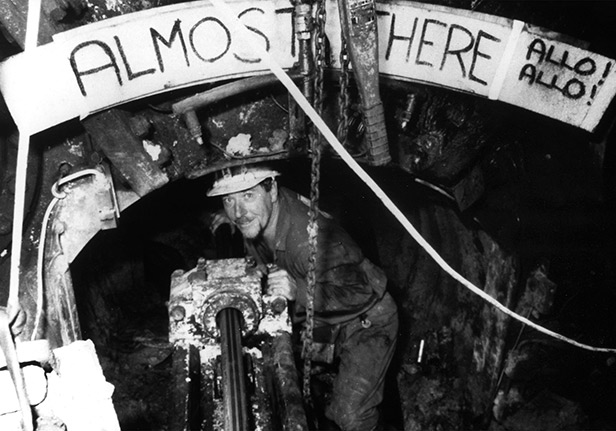 The meeting of the tunnel halves – a feat of engineering that took over two years to complete – meant that Britain was directly connected to Europe for the first time since the Ice Age.

Around 13,000 workers had taken part in the digging, excavating 95 miles of tunnels at an average depth of 150 feet below sea level. Eight million cubic meters of soil were removed, at a rate of 2,400 tons per hour.

The project would take another three and a half years to complete. The Channel Tunnel was officially opened on May 6, 1994, with the first passenger rail service taking place in November.

The Channel Tunnel - Did you know?