Three years after Neil Armstrong set foot on the Moon, Apollo 17 astronauts Gene Cernan and Harrison Schmitt became the last men to this day to walk on the lunar surface.

Astronauts Eugene Cernan and Harrison Schmitt, two of the three-man crew of Apollo 17, became the last men to walk on the Moon on December 13, 1972.

The two men spent several hours on the Moon’s surface, collecting samples and undertaking tests, as well as making excursions to hitherto unexplored areas in their Lunar Roving Vehicle, before returning to the Lunar Module.

The pair unveiled a small plaque to commemorate their landing at the Taurus-Littrow valley, which stated simply: "Here man completed his first explorations of the Moon, December 1972".

Commander Eugene 'Gene' Cernan made a brief speech before boarding the module, saying: “We leave as we came and, God willing, as we shall return - with peace and hope for all mankind.” 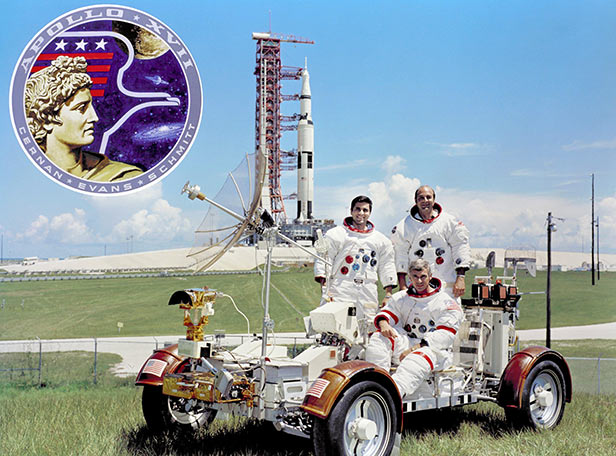 The two astronauts launched the Lunar Module the following day to meet the Command/Service Module, piloted by third crew member Ron Evans, in orbit above the Moon. The crew returned to Earth on December 19, landing safely in the Pacific Ocean.

With the announcement of the forthcoming Skylab and Space Shuttle programmes – as well as demands made on budgets by the Vietnam War – it was decided that lunar exploration was no longer a priority, so Cernan and Schmitt remain the last two humans to have walked on the Moon to date.

[July 21, 1969: Neil Armstrong makes a giant leap for mankind onto surface of the Moon]