On this day in 2001, an exclusion zone was placed around an abattoir in Essex after a case of foot-and-mouth disease is detected.

An outbreak of foot-and-mouth, one of the most devastating and infectious diseases to attack cattle and pigs, was detected in Essex on this day in 2001, leading to a cull of animals that cost the UK an estimated £8 billion.

Diseased animals were discovered at Cheale Meats abbatoir in Little Warley during a routine inspection. Another 27 pigs, transported from farms in Buckinghamshire and on the Isle of Wight, were also found to be showing symptoms.

Five-mile exclusion zones were placed around the three sites while an investigation took place into the first significant outbreak of foot-and-mouth since 1967.

The disease attacks cattle, pigs, sheep and goats. It causes the animal to suffer a high fever, and this is followed by blistering to the mouth and hooves.

Most animals can recover from it, and human infection is extremely rare, but as infected animals cannot be used for meat and dairy products and transmission of the disease is so fast and widespread, outbreaks have usually resulted in a mass cull of livestock. 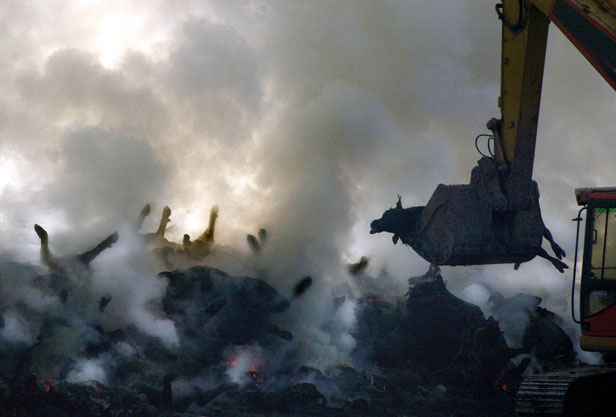 All 300 animals at the abattoir were destroyed and a ban was placed on the export of British meat and dairy products by the government (and later by the European Commission) – but crucially, the movement of animals within the UK was allowed to continue for three more days.

Within two weeks, cases of foot-and-mouth were confirmed throughout the length and breadth of the country. Reports differ, but the number of animals slaughtered before the country was declared disease-free in January 2002 has been estimated at as high as 10 million.

[February 18, 2005 - Hunting ban comes into force across England and Wales]

Foot-and-mouth - Did you know?
Print this story