The recapture of the Falkland Islands was completed when Argentinian general Mario Melendez and SAS commander Michael Rose agreed to a conditional surrender in Port Stanley's Government House.

On this day in 1982, cheers rang out in the House of Commons as Margaret Thatcher announced that the war to retake the Falkland Islands was over.

The happy news was quickly relayed to the country, and a crowd soon gathered outside Downing Street to salute the triumphant Prime Minister.

But the celebrations were tempered by the costs incurred by the operation to repel the Argentine invasion of the Falklands and South Georgia. 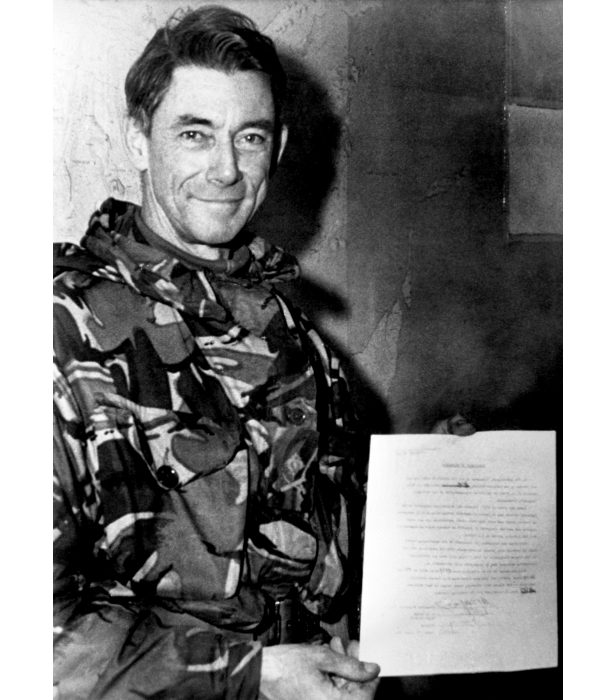 Victory was assured after British forces mounted a concerted attack on the high ground around the town of Stanley - the last line of Argentine defence.

Under sustained and deadly fire, Argentina's beleaguered troops began to throw down their weapons.

Realising that the game was up, he radioed his President, Leopoldo Galtieri, for advice. It wasn't the conversation he had hoped for. He was labelled a coward, ordered to launch a counter-attack, and reminded that Argentine commanders were compelled to fight until they were down to fewer than half their men.

But Menendez realised his troops had nothing left to give.

On the morning of June 14 he made contact with SAS commander Michael Rose and invited him for talks at Government House in the centre of Stanley.

A large white flag was attached to a Royal Navy helicopter and Rose flew in, accompanied by a Spanish-speaking Royal Marine and a signaller.

Both Menendez and Rose agreed that the war's endgame could not be house-to-house fighting - there were too many civilian lives in the balance.

After six hours of negotiation, Menendez agreed to a conditional surrender, and the guns fell silent.

For the first time since 1945, Britain had a clear-cut military triumph to celebrate.

Argentina's surrender - Did you know?
Print this story
Back to top