Universal Pictures invented the summer blockbuster and made a star of director Steven Spielberg with a film that terrified and thrilled audiences the world over.

Any cinemagoer of a certain age will only need hear the opening bars of John Williams’ iconic score to be transported back to the first time they saw Steven Spielberg’s film Jaws, which was released on this day in 1975 to become arguably the archetypal summer blockbuster.

[Take our quiz: How much do you know about Jaws?]

A simple suspense tale of a small fictional island off the New England coast being terrorised by a 25-foot long Great White shark, Jaws, based on Peter Benchley's bestselling novel of the same name, shocked and thrilled in equal measure - but also worked as a stirring human story of a man overcoming a fear of water to protect the community he served.

Featuring memorable performances from Roy Scheider as Police Chief Brody, Richard Dreyfus as marine biologist Hooper and Robert Shaw as gnarled shark fisherman Quint – as well as a number of  stunt sharks which would become known as ‘Bruce’ – it would go on to be the highest-grossing movie ever to that date.

This has seemed an unlikely scenario during filming. With the spectre of a potential Screen Actors’ Guild strike putting pressure on the production, cameras began rolling in May 1974 even before Spielberg had a completed script that was to his liking.

However, filming was continually hampered by the ‘Bruce’ sharks. These had worked perfectly in the workshop, but the harsh saline waters of the Atlantic Ocean wreaked havoc on their mechanisms. They rarely functioned at sea, putting shooting back by weeks and causing huge budget overruns; the planned 55-day shooting schedule ended up taking 159 days.

Luckily some benefits arose from the delayed schedule and unreliability of the prop sharks – firstly, that the script could be refined; and secondly, the enforced decision by Spielberg that the shark should only be ‘suggested’ by water movement – and Williams’ score – so that it remains an unseen, menacing presence until almost two-thirds of the way through the film.

When the film was finally completed it was shown to a test audience at a Dallas cinema – and as producer David Brown said, “the screams started – and they never stopped”. Sensing they had a hit on their hands, Universal Studios decided to launch the movie in style. 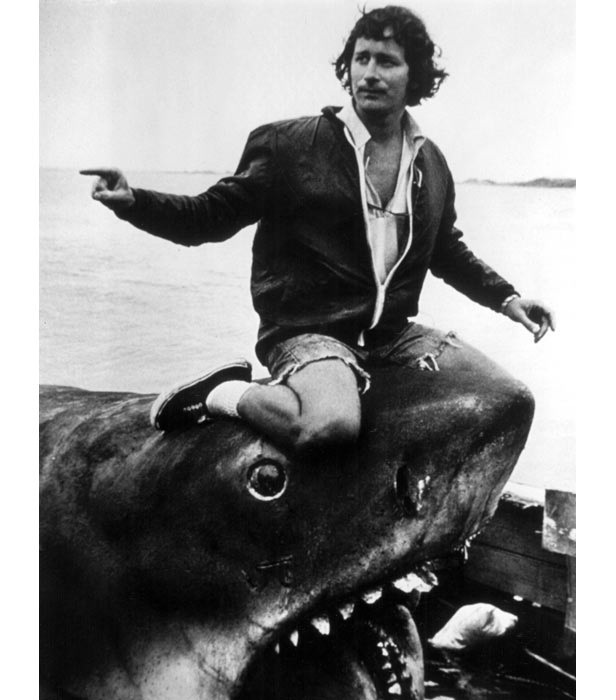 While most pictures at the time would be shown across a small number of screens, Jaws was distributed to 464 cinemas in North America, rising to 950 by mid-August, and given an unprecedented marketing budget of $1.8 million.

The strategy paid off – handsomely. Jaws would go on to become the first movie to gross over $100 million, and set the template for studios releasing ‘high-concept’ pictures for summer across hundreds of screens with huge advertising campaigns, which remains in practice today.

Jaws – Did you know? 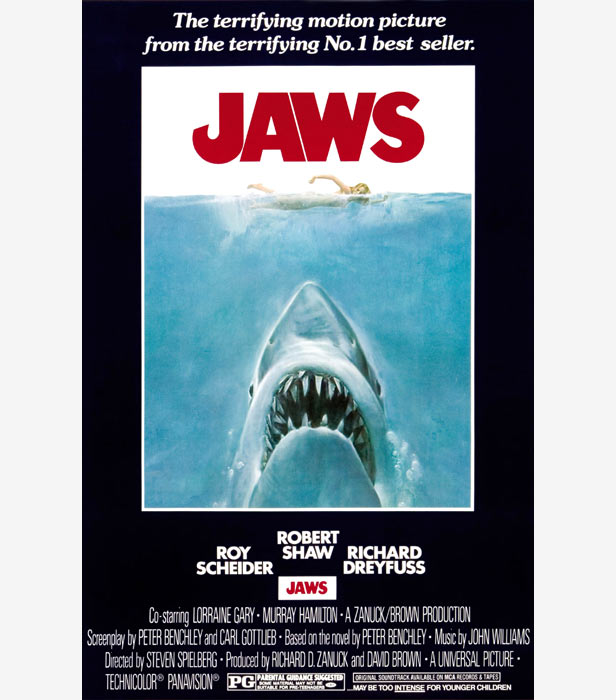