June 26, 2000: The 'book of life' falls open as scientists crack the human genome

President Bill Clinton unveiled the draft sequence of the human genome at a White House conference - a scientific breakthrough that promised new ways of preventing, treating and eradicating many genetic diseases.

Hailed as a map leading to a future devoid of disease and pestilence, the draft sequence of the human genome was published on this day in 2000.

The successful decipherment of this vast genetic archive was nothing less than a milestone in the history of human endeavour. It was as if man had peered over God's shoulder and cribbed from the book of life.

The information - essential the blueprint for our species - promised to offer medical science the key to untold riches.

As the video above explains, the decoded genome would lead to new ways to prevent, diagnose, treat and cure disease. There would no longer be any hiding place for the genes responsible for hereditary cancer, diabetes and heart disease. Treatments could be tailored to individual patients, with our body's own (previously) mysterious talent for self-repair now open to exploitation.

US President Bill Clinton, who announced the feat at the White House, called it "one of the most important, most wondrous maps ever produced by humankind".

In recognition of the fact that much of the research was conducted at the Sanger Institute in Cambridge, British Prime Minister Tony Blair joined from London on a live video link, saying: "Let us be in no doubt about what we are witnessing today: a revolution in medical science whose implications far surpass even the discovery of antibiotics."

The breakthrough also spawned a host of ethical and social posers. These ranged from the potential for genetic discrimination in employment and insurance to the spectre of 'designer babies' carrying hand-picked traits. Some even feared than humanity was assisting in the creation of our own successor species.

But these fears have proved unfounded, largely due to the slow and considered pace of progress in the post-genome era.

[April 25, 1953 - Crick and Watson crack the code of life as paper reveals structure of DNA]

Beyond the hubris of the political leaders, the mapping was not an end in itself, it was merely a starting point.

But scientists have begun to describe enormous progress in understanding human disorders as a result of their knowledge of the human genome.

Before they broke the code, researchers knew the genetic basis of about 60 disorders; today, they know the basis of around 5,000 conditions.

Cancer has been a particular successful area of genome-based research. Doctors are now able to detect the 'driver mutations' of many tumours, allowing them to pick the drug that could work best.

But there is still some way to go before our new understanding can have a significant effect on everyday medicine and health.

Much like the Apollo space programme, biology's own successful moon-shot - possibly its magnum opus - merely hints at the future which lies in wait for our species.

The Human Genome Project - Did you know? 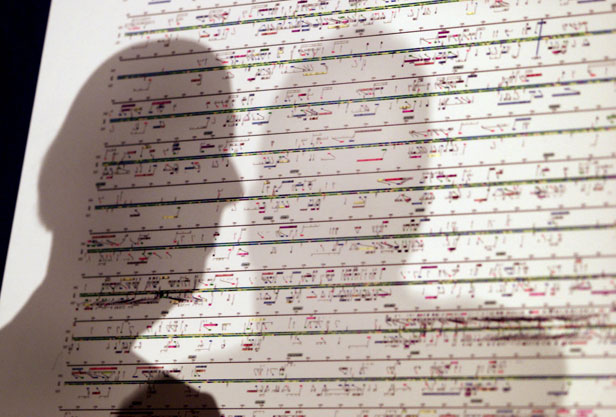