The people of Britain put 1970s austerity to one side to celebrate 25 years of the Queen's reign with a day of street parties, parades and a glimpse of Her Majesty on the balcony of Buckingham Palace.

Royal well-wishers converged on London to celebrate the 25th year of the Queen's reign on this day in 1977.

An estimate crowd of one million people craned for a glimpse of Her Majesty as she travelled to St Paul's Cathedral for a service of thanksgiving, with cheers ringing out as the Gold State Coach passed.

A further 500 million people across the Commonwealth watched live television coverage of the events of the day, and around 12,000 street parties were held across Britain in honour of the Silver Jubilee.

The congregation at St Paul's read like a Who's Who of global dignitaries. US President Jimmy Carter was in attendance, as was Prime Minister James Callaghan and all his living predecessors -  Harold Macmillan, Alec Douglas-Home, Harold Wilson and Edward Heath.

Afterwards, the Royal Family attended a lunch at the Guildhall where the Queen thanked the people of Britain and the Commonwealth for the “loyalty and friendship” that had given her “strength and encouragement during these last 25 years”.

Channelling Shakespeare's Cleopatra, she said: "When I was 21 I pledged my life to the service of our people and I asked for God's help to make good that vow. Although that vow was made in my salad days, when I was green in judgement, I do not regret nor retract one word of it."

Despite strong winds and sudden downpours, the crowd was still six-deep as she returned to Buckingham Palace, and its patience was rewarded with the Queen making a number of appearances on the balcony.

The Queen's Silver Jubilee - Did you know? 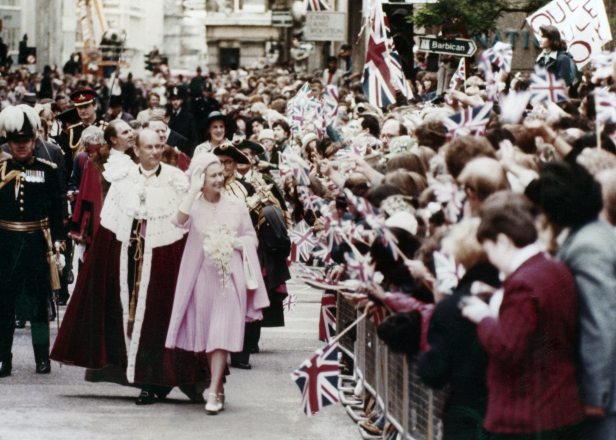