On this day in 1954, the United States conducted its largest ever nuclear weapon test, code-named Castle Bravo, at Bikini Atoll in the Marshall Islands.

On this day in 1954, the US military exploded a huge hydrogen bomb near Bikini Atoll, part of the Marshall Islands in the Pacific Ocean, causing the biggest ever man-made explosion to date.

The detonation of the device - nicknamed ‘Shrimp’ - took place at 06:45 local time, and delivered a blast of 15 megatons. This was much greater than expected, and over 1,000 times the force of the atomic bombs that had been dropped on Hiroshima and Nagasaki in August 1945.

The explosion formed a fireball almost four and a half miles across, visible from 250 miles away, and left a crater 6,500 feet in diameter and 250 feet deep. The following mushroom cloud spread over 62 miles and rose to a height of 130,000 feet within ten minutes.

The violence of the blast overwhelmed instruments set to measure it. It had been expected to deliver just 6 megatons of force – this combined with high winds led to the greatest-ever accidental release of radiation by the US.

The radioactive fall-out spread to nearby small islands Rongerik, Rongelap and Utirik. Marshall Islands senator Jeton Anjain would later recall what he witnessed that day.

"Approximately five hours after detonation, it began to rain radioactive fallout at Rongelap," he said. "Within hours, the atoll was covered with a fine, white, powdered-like substance. No one knew it was radioactive fallout. The children played in the snow. They ate it."

Bikini islanders that had been moved to neighbouring islands had to be relocated again 48 hours after the blast due to contamination.

Three weeks later it emerged that a Japanese fishing boat, named Lucky Dragon no. 5, was within 80 miles of the test zone at the time of the detonation. Its 23 crew were severely affected by radiation sickness, one of them dying of a secondary infection.

Oishi Matashichi, one of fisherman aboard the luckless vessel, recalled seeing a "yellow flash" through a porthole.

"Wondering what had happened, I jumped up from the bunk near the door, ran out on deck, and was astonished," he said. "Bridge, sky and sea burst into view, painted in flaming sunset colors. I looked around in a daze. I was totally at a loss."

The result was that what had started as a secret test became an international incident, prompting widespread calls for the cancellation of all atmospheric thermonuclear testing.

Castle Bravo - Did you know? 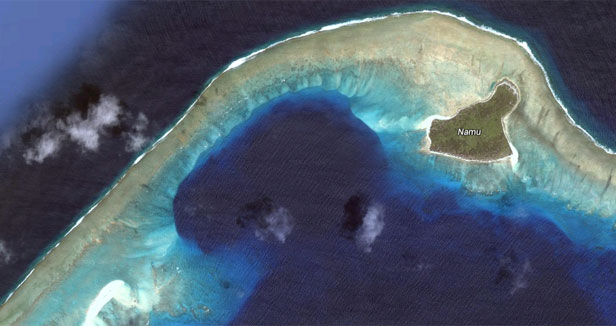