Eleven million gallons of crude oil devastated Alaska's coastline and wildlife when the tanker Exxon Valdez ran aground and began to leak its cargo.

One of the greatest environmental disasters of modern times occurred on this day in 1989, when the US supertanker Exxon Valdez ran aground on Bligh Reef, Prince William Sound in Alaska, spilling at least 11 million gallons of oil into the ocean.

As the video above recalls, the spill affected 1,300 miles of shoreline and would cover over 11,000 square miles of ocean, killing hundreds of thousands of birds and sea mammals and hugely disrupting the economy of the area.

Immediate recovery and clean-up efforts were hampered by the location of the spill – accessible only by boat, plane or helicopter – and high winds, which prevented attempts to suck the slick from the top of the waters. 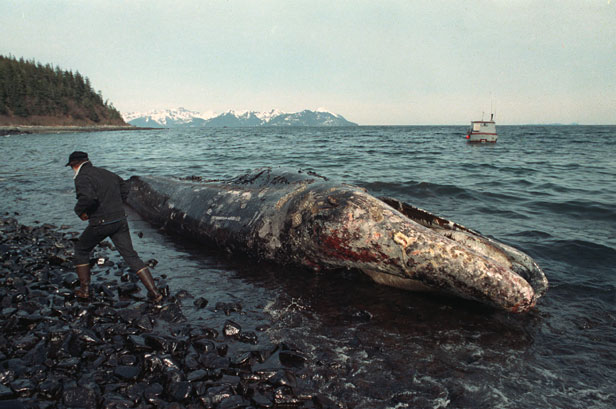 The crash was later blamed on crew fatigue and overwork and the failure of the third mate, who was piloting the tanker, to use its Collision Avoidance System radar; it has subsequently been suggested that the equipment was faulty.

The vessel had left normal shipping lanes to avoid icebergs, but had failed to return to them before running aground on the reef.  Its captain, Joe Hazelwood, was found to have been drinking and was asleep in his cabin at the time of the collision.

Although attempts to burn the oil off were partially successful, oil company Exxon was widely criticised for its slow response to the disaster. In 1994 a federal court ordered the company to pay $5 billion in punitive damages.

This was reduced to $2.5 billion on appeal, and even further by the US Supreme Court in 2008. Exxon has paid out over $1 billion in damages to date. By 2010, more than $2 billion had been spent on the clean-up operation.

Exxon Valdez – Did you know?