March 5, 1936: The Spitfire - the iconic fighter plane of the Battle of Britain - takes to the skies

The high-speed fighter plane that was to capture the public's imagination - and put fear into the hearts of German pilots - made its maiden flight at a Hampshire airfield.

The Supermarine Spitfire - the British fighter aircraft that became the iconic plane of the Battle of Britain - made its first flight on this day in 1936.

On the night of March 5, Captain Joseph 'Mutt' Summers - chief test pilot at Supermarine's parent company Vickers-Armstrongs - took off in the Type 300 K5054 prototype from Eastleigh airfield in Hampshire.

At the end of the eight-minute flight, Summers climbed out of the cockpit and said to the small group of observers "I don't want anything touched", indicating that nothing required correcting before his next test flight. 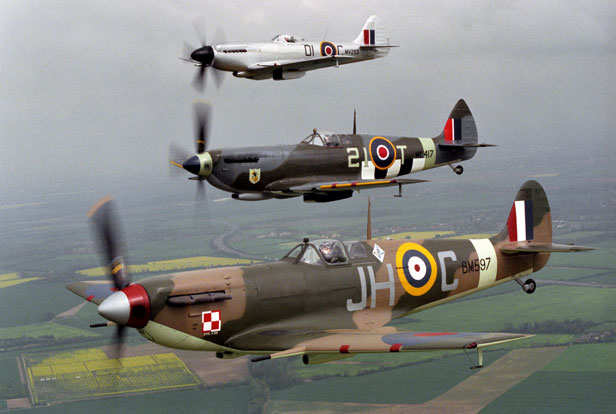 The Spitfire was the creation of engineer RJ Mitchell, who had been asked by Vickers-Armstrongs chairman Sir Robert McLean to design a plane to meet 'Air Ministry Specification F.7/30' which sought a fast, manoeuvrable fighter to replace the outdated models then in service with the RAF.

While Mitchell's Type 224 fighter failed to secure the contract, McLean encouraged him to develop a "real killer fighter" which would exceed the ministry's specification.

With its characteristically thin elliptical wings, battery of four machine guns and powerful Rolls-Royce Merlin engine, the all-metal Type 300 soon caught the eye of the ministry, who - concerned at the news the Germany had revived its air force - co-funded the development of the prototype.

Three months after the first test flight, and after the easy-to-control 349mph K5054 had proved popular with its test pilots - some claimed it "almost flew itself" - the Air Ministry put in an order worth £1.25 million for 310 Spitfires.

Four years later the plane was to play a vital role in repelling the might of the Luftwaffe, capturing the public's imagination during the Battle of Britain and establishing 'Spitfire' as a legend of the skies.

[September 7, 1940: German bombs rain down on London as the Blitz begins]

The Spitfire - Did you know?
Print this story
Back to top