Two battalions of US Marines landed on beaches near Danang, heralding the direct involvement of American combat units in the Vietnam War.

America finally signalled its intention to become fully committed to war in Vietnam with the arrival of 3,500 combat troops just north of Da Nang, on this day in 1965.

It was all much to the dismay of General William Westmoreland, the senior US officer in the country at that time.

Both Westmoreland (pictured below) and General Nguyen Van Thieu, chief of the South Vietnamese Armed Forces Council, had asked for the troops to be "brought ashore in the most inconspicuous way feasible". 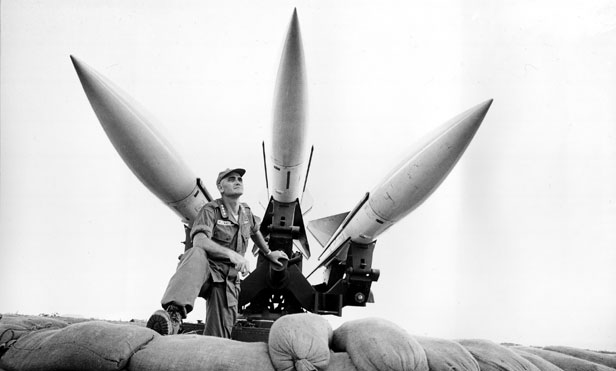 Under the previous US president, John F. Kennedy, the number of American military ‘advisors’ in the country had risen to 16,000.

The day after Kennedy’s assassination, new president Lyndon Johnson stated that "the battle against communism... must be joined... with strength and determination".

Throughout 1964 Johnson faced pressure from domestic and foreign sources to negotiate a peaceful solution, but after attacks on US ships off Vietnam in the ‘Gulf of Tonkin incident' in August, Congress gave him the powers to take any action he deemed necessary to protect South Vietnam.

By the following year it was clear that South Vietnam, riven by internal dissent and unfocused leadership, was losing its war with the communist North. And, with US air bases in the country regularly being targeted for attacks, Johnson sent in the 3,500 marines initially as a defensive security force.

The deployment was met with anger from many quarters, with China and the Soviet Union threatening intervention. Some 2,000 demonstrators including Vietnamese and Chinese students attacked the US Embassy in Moscow, while a car bomb outside its Saigon embassy killed 22 people.

Vietnam War escalation - Did you know?
Print this story
Back to top