Following a hard-fought campaign, the Iron Lady made history on this day in 1979 by becoming the UK’s first female Prime Minister.

Margaret Thatcher’s Conservative party was elected with a majority of 43 at the 1979 general election. The election had come about after Thatcher, then the leader of the opposition, had tabled a motion of no confidence in the precariously sitting Labour government in the wake of the Scottish devolution referendum debacle.

The election came at the end of a tumultuous decade for Britain and British politics. It immediately followed the Winter of Discontent which saw widespread public sector strikes with rubbish piling up in the streets and even bodies going unburied. Callaghan’s government had only won a majority of three seats at the previous general election (under the leadership of Harold Wilson) and its hold on power had grown ever more tenuous leading up to the vote of no confidence.

The Tory party’s campaign was bolstered by help from nascent ad agency Saatchi & Saatchi, as well as by promising to cut income tax, reduce public expenditure, make it easier for people to buy their own homes and curb the power of the unions. 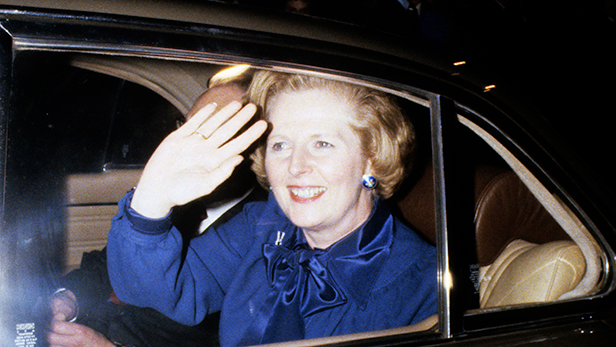 The UK’s first female prime minister went on to dominate British politics for the next 11 years, before being ousted in November 1990. Her years in power were marked by the privatisation of public services such as utilities, the selling off of council houses to their tenants, the rekindling of the UK’s ‘special relationship’ with the US and rising unemployment. The Falklands War was another flashpoint of her tenure. The 1982 conflict lasted only two months but cost 255 British and 649 Argentinian lives.

Despite being removed as leader of the Conservative party in 1990, the Iron Lady’s legacy has cast a long shadow over politics since her 1979 election victory.

Margaret Thatcher’s 1979 win – Did you know?
Print this story
Back to top