When is the May Day bank holiday and why do we celebrate May Day?

This year marks the 40th anniversary of the Early May Bank Holiday, better known as May Day. When is it, and why did one of the world's oldest feast days take so long to become an official holiday?

The spring bank holidays always fall on the first and last Mondays of May, with the first commonly known as May Day and the second named the Spring Bank Holiday. This year marks 40 years since the UK's first May Day bank holiday, which took place on Monday May 1, 1978.

When is this year's May Day bank holiday?

This year’s May Day bank holiday - formally known as the Early May Bank Holiday, is on Monday 7 May.

When was the first Early May bank holiday?

While it's only been an official UK bank holiday for 40 years, May Day is one of the oldest festivals in Great Britain, if not the world.

The earliest May Day celebrations appeared with the Floralia - the festival of Flora, the Roman goddess of flowers - which was held on April 27 during the Roman Republic era. It is also believed that the day has roots in pagan Anglo-Saxon customs and the pagan festival Beltane, which marks the beginning of summer.

Why do we have two bank holidays in May?

In 1871 the Bank Holidays act was introduced, which ensured four days of the year were seen as public holidays. These were Easter Monday, Whit Monday, the first Monday in August and Boxing Day. Labour Day, known as International Workers’ Day in the UK, is also observed on May 1 and is a public holiday in many places.

The date was chosen to commemorate the Haymarket affair of 1886, which began as a peaceful rally in support of workers striking for an eight-hour day, and ended with a bombing that killed seven police officers and four workers.

International Workers’ Day celebrates labourers and the working classes. In recent years, it has become a day for large-scale protests organised by socialist and anti-capitalist movements across the world.

The Early May Bank Holiday itself was only instigated in 1978 by then-Employment Secretary Michael Foot. Its introduction was a bone of political contention because of its association with the Labour movement - one Conservative peer claimed that the idea of having a public holiday on May Day was a matter of ‘political ideology’, and indeed May 1 was, for the Soviet Union and other Communist Eastern Bloc countries - an opportunity to show off their miliary might with grand parades in the largest cities.

By the time the second Early May Bank Holiday had rolled around Labour was out of power, but despite the link with socialism - and the day's reputation for poor weather - successive Conservative governments kept the holiday in place. In 2011 ministers outlined plans to move the May Day bank holiday to Trafalgar Day on or near October 21, but this has yet to become law.

[Read more: From prepping to painting and papering - 5 DIY ideas for the Bank Holiday]

How is May Day traditionally celebrated in the UK?

May Day is typically celebrated with Morris Dancing, singing and feasts, as well as the crowning of the May Queen and dancing around the maypole.

Many towns and villages have their own particular traditions. Padstow in Cornwall holds its annual Obby-Oss day of festivities which are believed to be among the oldest fertility rites in the UK, while the Cornish villages of Kingsand, Cawsand and Millbrook in Cornwall celebrate the Flower Boat Ritual; houses are decorated in flowers and a model of the ship The Black Prince is carried through the villages before being cast adrift at Cawsand.

May Day has been a traditional day of festivities throughout the centuries, most associated with towns and villages celebrating springtime fertility (of the soil, livestock, and people) and revelry with village fetes and community gatherings. 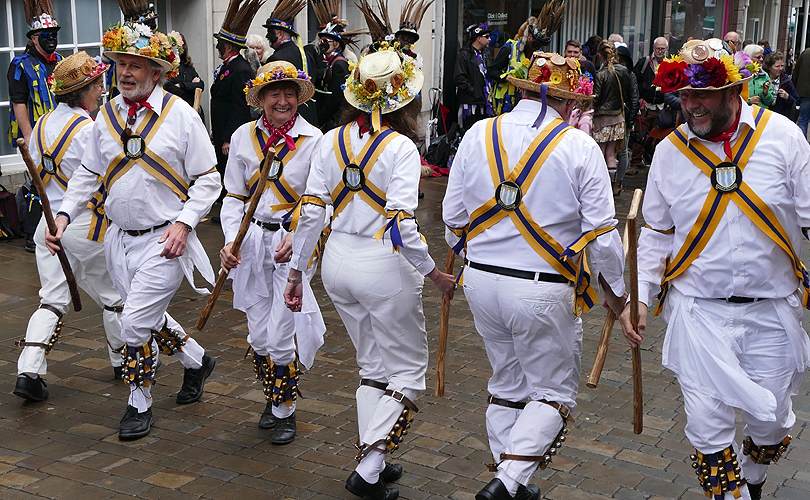 How is May Day traditionally marked in the rest of the world?

Many countries mark the day with a wide variety of customs and rituals.

In Ireland, May Day has been celebrated in Ireland since pagan times as the feast of Beltane and in latter times as Mary's day. Traditionally, bonfires were lit to mark the coming of summer and to banish the long nights of winter. Officially Irish May Day holiday is the first Monday in May. Old traditions such as bonfires are no longer widely observed, though the practice persists in some places across the country.

Modern May Day ceremonies in the US vary greatly from region to region, and many unite both the holiday's "Green Root" (pagan) and "Red Root" (socialist) traditions.

In Finland, Walpurgis witnesses the biggest carnival-style festival held in cities and towns. It is a national holiday in Estonia celebrating the arrival of spring. In France, people may present loved ones either with bunches of lily of the valley or dog rose flowers as a symbol of spring.

In rural regions of Germany, Walpurgisnacht celebrations of pagan origin are traditionally held on the night before May Day, including bonfires and the wrapping of a Maibaum (maypole). Young people use this opportunity to party, while the day itself is used by many families to get some fresh air.

Also in Germany, May 1 is also celebrated by the delivery of a maypole, a tree covered in streamers to the house of a girl the night before. The tree is typically from a love interest, though a tree wrapped only in white streamers is a sign of dislike.

Women usually place roses or rice in the form of a heart at the house of their loved one. It is common to stick the heart to a window or place it in front of the doormat. In leap years, it is the responsibility of the women to place the maypole. All the action is usually done secretly and it is an individual's choice whether to give a hint of their identity or stay anonymous. In Italy it is called Calendimaggio or cantar maggio and a seasonal feast is held to celebrate the arrival of spring. It is also a day to celebrate spring in Greece. On May Day, Bulgarians celebrate Irminden. The holiday is associated with snakes and lizards and rituals are made in order to protect people from them. Its origins are thought to be pagan.

On May Day, Romanians celebrate the Arminden, the beginning of summer, symbolically tied with the protection of crops and farm animals. May Day is celebrated throughout Spain as Los Mayos.

In Sweden, the first of May is celebrated as International Workers' Day. It is a national holiday in Poland and it is customary for labour activists and left-wing political parties to organize parades in cities and towns across the country.

What other Bank Holidays do we have in the UK?

The number of bank holidays enjoyed by British citizens varies between England and Wales, Scotland and Northern Ireland.

There are eight standard Bank Holidays every year in England and Wales. We start the year with New Year’s Day, January 1. Then there are Good Friday and Easter Monday, whose dates are dependent on the lunar calendar. The spring bank holidays always fall on the first and last Mondays of May, with the first known as the Early May Bank Holiday and the second the Spring Bank Holiday.

Northern Ireland has two additional bank holidays - March 17 for St Patrick's Day and July 12 for the anniversary of the Battle of the Boyne, also known as Orangemen’s Day. Both may be moved to the following Monday if they fall on a weekend.

Scotland has nine bank holidays. To mark the importance of New Year north of the border, January 2 is also a day off, as is St Andrew's Day on November 30. However Easter Monday is a normal working day in Scotland, and the Summer Bank Holiday is celebrated not on the last Monday in August but on the first.

While the St Andrew's Day Bank Holiday Act was passed by the Scottish Parliament in 2006, and St Patrick's Day has always been a public holiday in Northern Ireland courtesy of a pre-partition act of parliament, neither England's St George nor Wales' St David are celebrated with a day off work.

However, during the 2017 general election Labour leader Jeremy Corbyn vowed to make all four saints' days bank holidays across the UK if Labour came to power, a pledge reiterated on St George's Day this year.

In Pictures: Britons celebrate Mother’s Day at a distance

In Pictures: Coronavirus contrast of empty motorways and supermarket queues

In Pictures: From landslide to pandemic – PM’s 100 days since general election

In Pictures: Flowers and wildlife flourish on the first day of spring

In Pictures: Through the years with forces’ sweetheart Dame Vera