Do you remember the ZX Spectrum?

In 1982, Sinclair unveiled an affordable, programmable colour home computer that became the top-selling games console of its day. We remember the ZX Spectrum.

Every now and then, amid those ever-more-fleeting stints of good, old-fashioned patriotism, you’ll see feature articles on the greatest British inventions and innovations. A staple component of those round-ups is, and probably always will be, the ZX Spectrum computer.

First released in 1982, the Spectrum was the brainchild of inventor Clive Sinclair. This iconic block of plastic and its rubber keys was the first home computer for countless British families and the first gaming machine for many children who went on to buy Nintendos, Segas, Xboxes and PlayStations for themselves and now for their own families.

At the time, the ZX Spectrum wasn’t the most technologically advanced machine on the planet, but that wasn’t the point. People wanted computers in their homes, but in recession-hit Britain who could afford one? Sinclair’s machine arrived at a very affordable price, it had mass appeal and it brought the computing revolution into the hands of everyday folk.

At a time when the mighty Commodore 64 was arriving on UK soil for a hefty £350 and the rival Acorn BBC Micro Model B cost a mighty £399, Sinclair’s machine went on sale for just £125. Thirty years on, it’s still one of the cheapest computers ever.

With an 8-bit processor doing the heavy lifting, the original Spectrum had just 16KB of RAM, while the luxury model came with 48KB and cost £175. It was capable of outputting graphics at 32 columns by 24 rows and 15 colours, with a lower screen resolution than its rivals of 256x192. When you consider most modern tech fans would turn the=ir noses up at a mobile phone offering less than a quad-core processor with 2GB RAM and a Full HD 1080p screen resolution, it shows you how far we’ve come in the last three decades.

Despite the low asking price, the Spectrum still managed to offer comparable performance to its rivals by focusing on cheaper construction. The keyboard was fashioned from a single piece of rubber rather than offering the individual plastic keys we are familiar with today, and the size of the components, including the circuit board, was kept as small as possible. Indeed, the whole unit was very small compared to its rivals and was designed to hook up to the television sets people already had in their houses.

With its great price, performance, as well as the ability to run a variety of software, it became a huge hit, eventually shipping five million units through its various iterations (and that’s not counting all the clones and licensed machines over the course of the next decade or so). For his troubles, Sinclair was knighted in 1983 for his services to British Industry

Impact of the Speccy

While the ZX Spectrum offered the same word processing and spreadsheet tools as its rivals, it really came into its own as a gaming machine. Throughout its tenure, around 25,000 software titles were launched for Sinclair’s machines, which gradually got more powerful as the years went on.

The Spectrum also bred an army of British developers. Rare, the studio now owned by Microsoft and which created Kinect Sports, Donkey Kong Country and GoldenEye 007, started life developing games for the Spectrum.

Over time the Spectrum would evolve. New systems and peripherals emerged, along with more advanced gaming experiences. The 1985 Spectrum 128 offered 128KB of RAM and played sound through the television set rather than the console. However, as the decade faded out, more powerful gaming machines like the Commodore Amiga 500, the Sega Master System and Nintendo Entertainment System squeezed out the Spectrum. 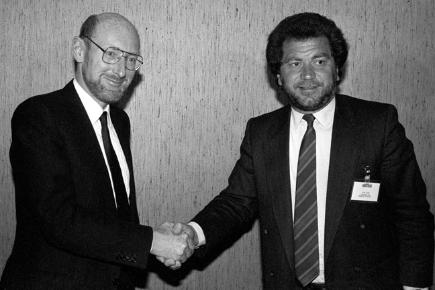 As competition increased and Sinclair struggled to keep the price down, he sold the technology to Alan Sugar’s Amstrad. The future Lord’s iterations weren’t as successful and production on Spectrum machines ceased in 1990.

Not quite dead yet…

In 2012 more than 100 new games developed for Spectrum machines were released. Spectrum Games can be played on today’s PCs via emulator software and apps, while countless machines are still cherished and loved by retro gaming fans. The ZX Spectrum: Elite Collection of games, featuring many of those mentioned above, is also available to download for iPhone and iPad.

When it celebrated its 30th anniversary in 2012, the first system was even immortalised by a Google Doodle on the search giant’s homepage. Ironically, as it coincided with St George’s Day, the doodle featured an 8-bit version of England’s patron saint and his fabled foe. You see, St George wasn’t the only great English Knight, who slayed formidable competition against all the odds…