If you’re in the process of choosing a brand new laptop, there’s a new option in the mix that comes directly from Microsoft.

The software maker is delving further into the hardware territory with the launch of its first laptop, the Surface Book.

Microsoft is promoting its latest device as ‘the ultimate laptop’ but does it really meet this bold claim? We’ve been trying the Surface Book to find out.

When you first see the Surface Book, it’s hard not to be wowed by the slick exterior. A solid magnesium body with a mirrored Windows emblem, a flexible hinge (known as the ‘Dynamic Fulcrum’) and backlit keyboard are hard to deny.

It’s also pretty thin at 0.9-inches. Weight wise, 3.48lb is OK but not super light – we took it out and about on the train to work and it was light enough to carry, but we wouldn’t want to lug it around all day.

The screen however, is a stunner at 13.5-inches. It’s glossy and colours are incredibly vibrant, especially when watching a movie on Netflix as we did. It’s possibly a tad too glossy for our liking as you do get a hint of a reflection, but otherwise it has good viewing angles. 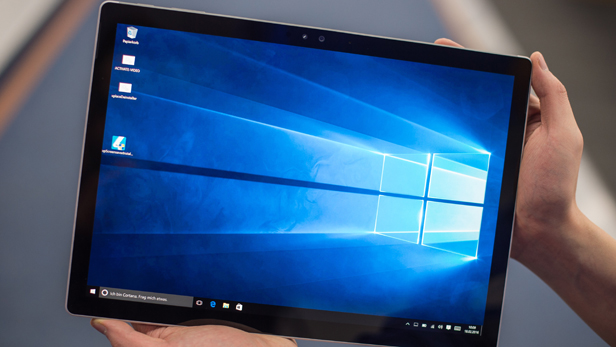 The hinge is good… and bad

One of the standout features on the Surface Book is how it’s primarily a laptop that can transform into a tablet (unlike the Surface Pros which are the opposite).

The keyboard houses some of the powerful components of the Surface Book – such as the main processors - so they are there for when you’re in laptop mode.

The keyboard won’t just pull off, you have to press a button to release it so that the screen part can safely detach itself from the processors.

In essence, this is a good idea to give laptop mode the type of power you’d want from a PC. However, it can be a bit annoying at times.

If you’ve got power-hungry software open, you won’t be able to remove the keyboard until you’ve saved and closed it. This is because such software will be actively using processors within the keyboard part of the machine.

One good thing is that you can flip the keyboard around to use as a tablet stand, but there are a few gripes. The process is too fiddly for our liking – having to safely detach, then flip it over the right way, and reattach, and if it’s low on battery you can’t flip it back round at all.  This was pretty bad on a train, as it meant having to put the Surface Book back in our bag with the screen exposed.

Is it fast enough?

Speed is not a problem for the Surface Book – especially with the top spec model which has the best processors, including an Intel Core i7 and Nvidia graphics, for a whopping £2,249. Not surprisingly it could run about a dozen applications at once, including video editing suite Adobe Premiere Pro, Microsoft Edge and Microsoft Word.

Generally, apps open quickly and smoothly, and we didn’t encounter any crashes while testing the Surface Book. There’s an ever growing collection of software to choose from in the Microsoft Store as well.

Microsoft claims the Surface Book offers up to 12 hours’ battery life for video playback, although that’s not quite what we experienced.

We may not have used it for video playback alone, but with a bit of typing, surfing the web and using the pen we got closer to eight hours’ battery life – which is still fairly reasonable but not the huge amount Microsoft boasts.

Like the latest Surface Pro, the Surface Pen is a useful addition if you’re into note taking. Click the eraser to instantly start the OneNote app and get writing, and flip it over to use it as a real eraser.

The Surface Book is an impressive piece of kit, and is beautiful inside and out. The hinge is innovative but could use some work if Microsoft ever decides to do a follow-up.

The biggest gripe is over the price. With a starting price of £1,299 rising by another £1,000 for the top-of-the-range model, this is not a cheap piece of kit and is just too expensive for the average consumer.

The Surface Book is mainly suited to power users such as video editors or graphic designers, especially when combined with the capabilities of the Surface Pen.

We might be more tempted to go for the Surface Book’s lower spec version, but we’re still talking upwards of a grand. If you’ve got some disposable income, then do go for it as it’s a great piece of kit, but otherwise, it’s not worth saving up for.

If you are tempted to get the Surface Book, you can buy it now from Microsoft,BT Shop, Amazon and John Lewis.

Find out what’s in the latest Windows 10 updates as they’re released by clicking here.

What do you think of the Surface Book? Let us know in the Comments section below.