Do you remember Clippy? We look at Microsoft's biggest flops

If you thought Windows 8 was Microsoft’s biggest mistake of recent years, you might be surprised to learn it’s just the latest in a long line of less successful products.

You don’t get to create a company the size of Microsoft without making a few missteps along the way. The fourth most-valuable company in the world (you-know-who is number one) has made an enormous amount of money from its most successful products over the years, so it probably doesn't worry too much about the ones that didn’t do so well. But that doesn’t mean we can’t dredge them up for a bit of nostalgic schadenfreude.

[Read more: Who owns Microsoft? All you need to know about the technology company] 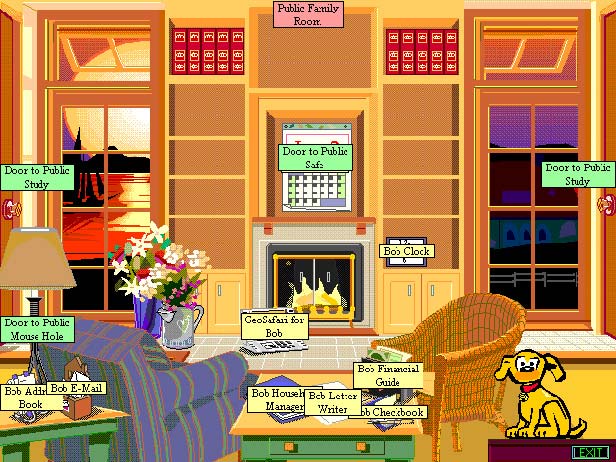 The Windows user interface underwent a major overhaul a couple of decades ago. No, we’re not talking about what happened with Windows 95, but Microsoft Bob.

Intended as a simpler way to work a computer than Program Manager (if anyone remembers that), Bob was a user interface that dropped the familiar “desktop and folders” metaphor in favour of a virtual home.

[Read more: Web browser tips - how to zoom in]

With their hands held by a cartoon dog called Rover, users launched programs by clicking household objects in an animated living room — although knowing what could be clicked and what couldn’t wasn’t always easy.

Microsoft was far from the only company to investigate new ways to hide the complications of Windows from novice users around this time, but none were successful. Bob was widely criticised for being ill-conceived and overly simplistic when launched in early 1995 and Windows 95 — launched later that year — soon put paid to the idea. 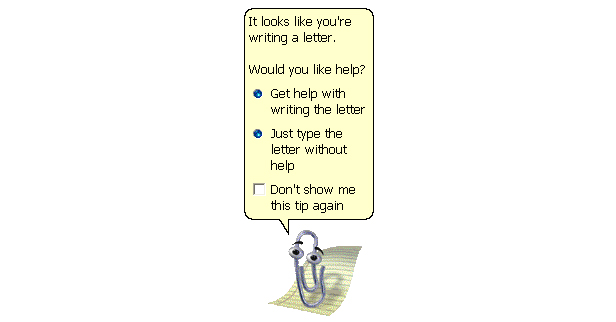 After getting its fingers burnt with Bob, you’d think Microsoft would have steered clear of cute animated characters designed to make PCs easier to use. Not so.

Clippy made its debut in Office 97 as a digital assistant that stepped in to help with documents when needed. Or, more usually, when it wasn’t.

Intrusive, irritating and attention seeking, Clippy butted in at the least appropriate moments, with interjections like: “It looks like you’re writing a letter. Would you like help?” as soon as you typed the word “dear” in a new document.

Parodied far and wide at the time, and still used as a metaphor for tone-deaf offers of technological assistance, Clippy was scaled back over successive versions of Office and eventually withdrawn. Microsoft hasn’t forgotten the talking paperclip completely, though, and anyone with a Windows Phone should trying asking Cortana about it…

[Read more: From Minesweeper to Metro - a history of Microsoft Windows] 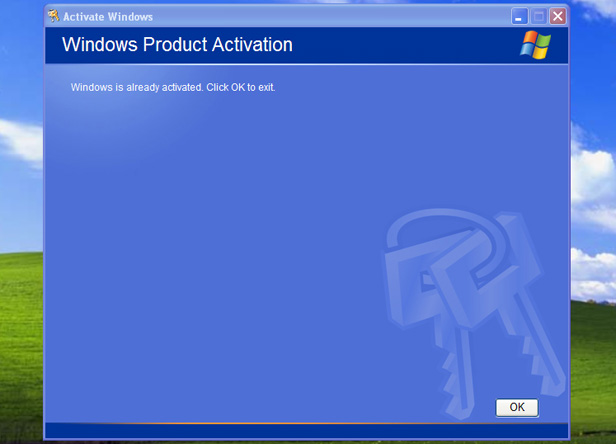 While early versions of Windows could be installed as many times as you liked as long as you had the appropriate serial number, Microsoft decided to clamp down on this open-door to piracy with Windows XP.

Windows XP had to be “activated” by comparing its serial number against an online database, both to check its validity and to see how many times it had been used already. Activation required internet access — something only around 40% of the UK had at home at that time — but it could also be done over the phone if you enjoyed listening to a robotic voice read out a long list of numbers.

Problems arose when certain PC components were changed — or when Windows thought they had been. “New hardware” was often mistakenly taken to mean “new PC”, which meant Windows XP needed to be activated again. If this happened more than a few times, Windows was locked down until its licence was validated again by phone.

This soon became infuriating to anyone who rejigged their PCs on a regular basis, but since the process was easily circumvented, it did little to stop piracy.

Worse still, once Windows Activation was wrapped up in the wider scope of the Windows Genuine Advantage Program, validation problems could prevent PCs from downloading software updates and even getting online. Microsoft was also caught downloading data on a daily basis as part of this “protection”, which hardly helped win over users.

Windows Genuine Advantage still exists, but it’s called Windows Activation technology in Windows 7 onwards and its reaction is now much less brutal when a PC is deemed “unlicensed”. 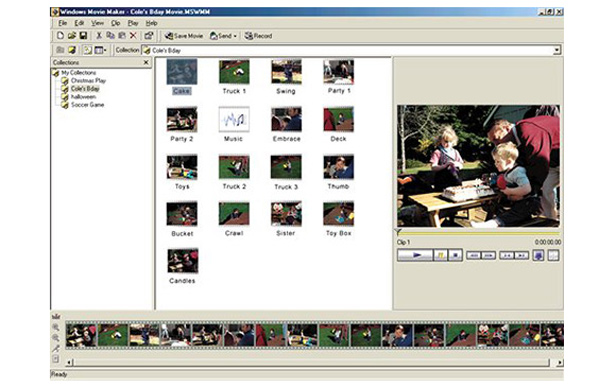 Whatever you thought of Windows 95, there’s no denying that it laid the groundwork for the excellent Windows 98. But then came Windows ME.

Windows Millennium Edition (or, as some wags had it, “Mistake Edition”) launched in 2000 and offered a host of new features pulled from the business-oriented Windows 2000. Unfortunately, some came at a cost — such as a much-reduced version of MS-DOS that broke compatibility with older software for the sake of faster boot times.

More of a problem was the fact that Windows ME wasn’t particularly stable and bugs — thought to be the result of a rushed development schedule — meant many users had a hard time getting it to work properly. In hindsight, the operating system was perhaps a little ahead of its time — or at least Microsoft’s ability — and it lasted a little over a year before being replaced by Windows XP. 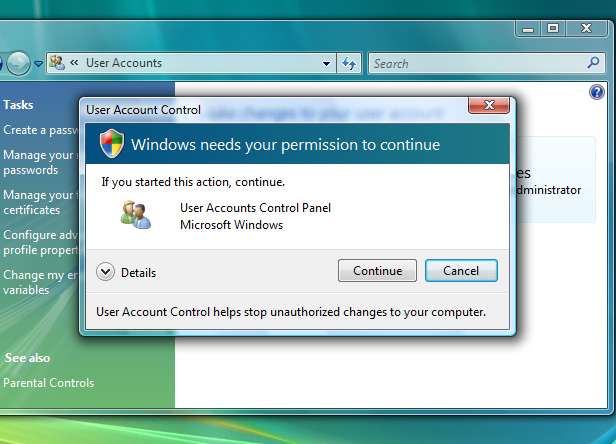 It’s said that versions of Windows are like Star Trek films — only the even-numbered ones are any good. So after the flop of Windows ME (The Final Frontier) and the success of Windows XP (The Undiscovered Country) came Windows: Generations, er, Vista.

With a six-year wait after Windows XP (the longest ever gap between versions of Windows), a very difficult development history and a launch that consisted of six different — and expensive — editions, Vista didn’t get off to the best of starts.

The operating system did introduce a number of features that we’re still using in Windows today, but many were poorly implemented. User Account Control, for example, may have improved Windows security, but it also drove users up the wall with its constant intrusive alerts. Many new PCs billed as “Vista capable” were also nothing of the sort and performance was very poor indeed.

As a result, sales were hardly stellar and many PC users stuck with Windows XP, leading Microsoft to continue selling that 2001 operating system until 2008. Even today, there are around eight times as many PCs running Windows XP than Windows Vista — that’s how bad it was. 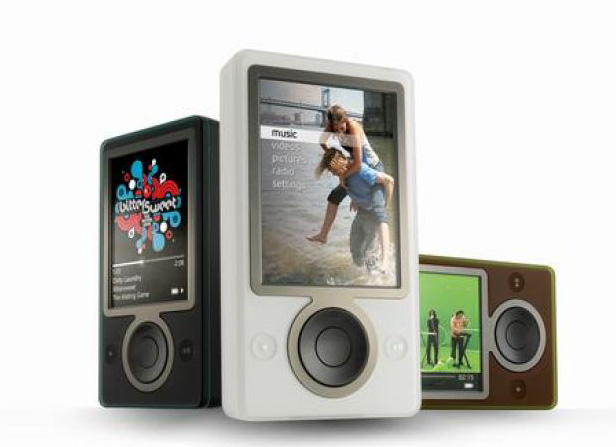 Apple turned the world of MP3 players upside down when it launched the iPod in 2001. Recognising the rich financial potential of a tightly integrated music player and music download service, Microsoft decided to compete. Unfortunately, it waited five years to do it and, by the time it appeared in 2006, Zune wasn’t a gadget that anyone was really interested in.

Criticised for being bulky and coming in no one’s favourite colour (brown), Zune did at least have some great features, including the ability to share songs wirelessly for a limited period with other players. Four versions over four years did little to encourage sales, however, and Zune was taken off the Microsoft playlist in 2011. 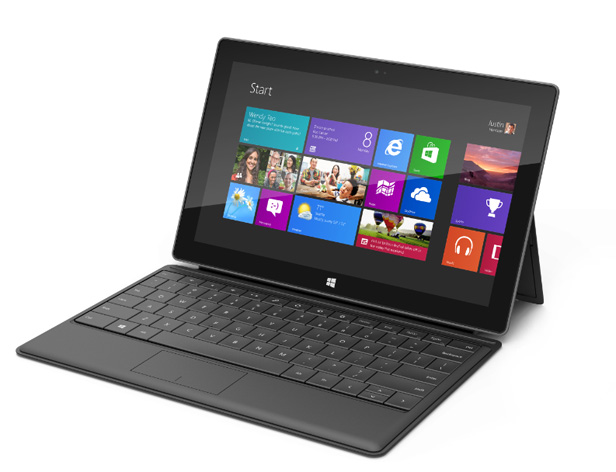 We’ve resisted the urge to include Windows 8 on this list, since while hardly a roaring success, it at least showed Microsoft could take a risk and try something new. Windows RT, on the other hand, was a step too far.

Launched alongside Windows 8, Windows RT looked the same and worked the same — but it wasn’t the same.

Designed for energy-efficient Windows tablets, Windows RT was only available pre-installed and could only run software downloaded from the Windows Store — and not the vast back catalogue of Windows applications. Users were confused about what they were getting, which wasn’t helped by Microsoft selling its own Windows Surface (i.e. RT) tablet alongside the Windows Surface Pro running Windows 8 proper.

Despite a few manufacturers launching low-cost Windows RT tablets and pseudo-laptops, the cut-down operating system didn’t take off. Microsoft took a $900 million hit on unsold Surface RT tablets in 2013 and Windows RT is currently not available on any new hardware. 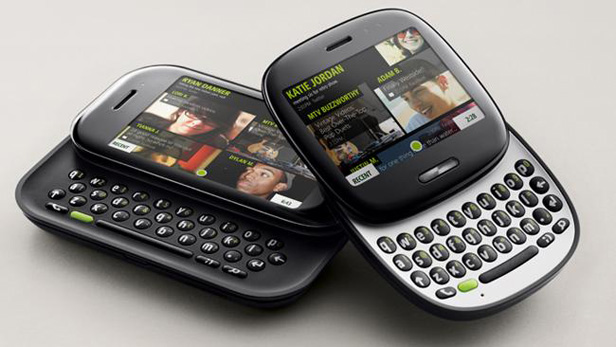 When Microsoft acquired slick smartphone company Danger in 2008, everyone thought it would lead to a radical (and overdue) reinvention of Windows Mobile. It didn’t. Instead, two years and $1 billion later, Microsoft launched Kin.

Kin ONE and Kin TWO were sort-of smartphones that couldn’t run apps and were designed for people who spent their lives looking at social media updates — i.e. kids. The launch was somewhat marred by controversy over an advertisement that appeared to condone sexting, but a bigger problem was that Kin was just too hard to use. There’s not much more to say about it than that, since Kin was killed just two months later after very poor sales. 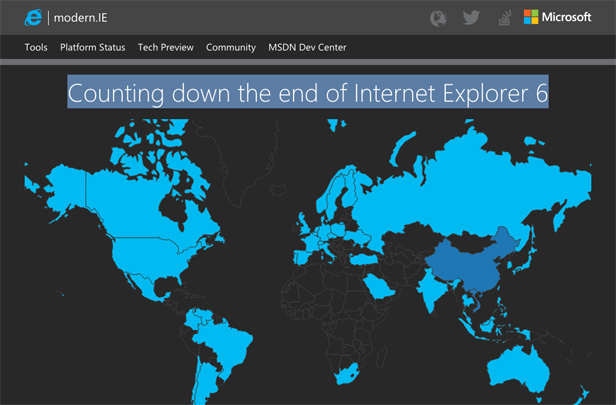 Windows XP may be the best version of Windows for many, but it wasn’t without its problems. Worst of these was the web browser it came with — Internet Explorer 6.

Internet Explorer has never had the best reputation when it comes to security and the standards it supports, but version 6 was a notable low point. “Critical” vulnerabilities were discovered on a regular basis and this became a serious concern when Internet Explorer 6 was then the most widely user browser around.

If there’s a plus side, widespread criticism about Internet Explorer 6’s multitude of weaknesses did open the window (if you’ll excuse the pun) for some serious competition — as did the fact that Microsoft waited five years before releasing Internet Explorer 7. Mozilla Firefox launched in 2002, for example, and went from strength to strength.

The availability of more secure, and more capable, alternatives to Internet Explorer 6 didn’t solve the problem, though — most Windows users just weren’t using them. Microsoft even went so far as to launch a site called Counting down the end of Internet Explorer 6 to encourage users to switch to a more recent version.

Read more: What would the world be like without Bill Gates?