Struggling to sleep? Sleep apps and gadgets that can help you get a good night

Get the 40 winks you deserve with these gadgets and sleeping aids.

Technology helps us in so many ways, from keeping us organised to helping us stay fit and active.

But as well as being indispensible during waking hours, tech can also help us recharge our own batteries in the nighttime.

Here are some of the best sleep gadgets to help you drift off and get a good night's sleep.

Wind down for the evening

Traditions are such an important part of our daily routine, from having that ritualistic coffee in the morning to checking all the windows before bed. Despite this, the act of getting ready for bed often gets overlooked. 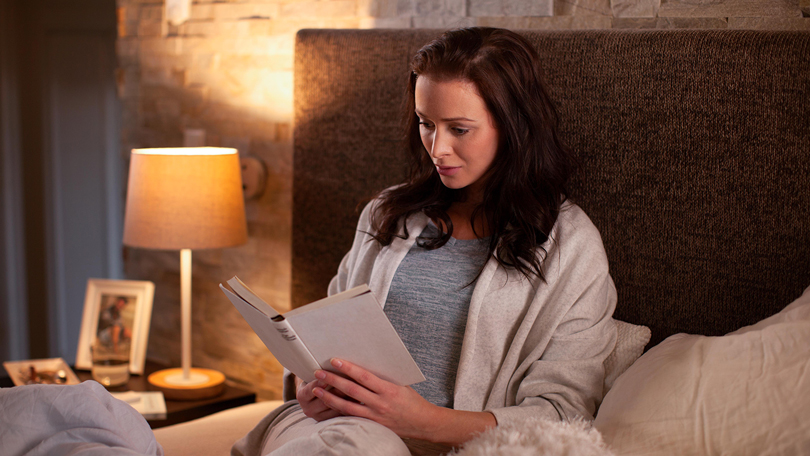 If you have Google Assistant or Amazon’s Alexa you can create voice-controlled routines which control the entire house. For example you can say: ‘Hey Google, Good night’ and in response it will dim the lights, lock the doors and turn off any devices.

This is where smart lighting in particular can help. Smart lights from Philips Hue, Hive and LIFX all contain ‘routines’ that when activated will adjust the lighting in your home, removing the harsh blues that keep us awake and gently switching over to those warmer oranges.

More and more of us are going to bed and ending our day through the lens of Twitter or Instagram. Even if social media isn’t your guilty pleasure our addiction to our phones is already making some of us more tired and less productive. The good news is that your phone can actually help.

Both Google and Apple have new mindfulness features designed to help us manage our screen time and in particular help us wind down in the evenings.

Apple’s version is called Downtime and lets you block access to certain apps between different parts of the day. Alternatively there’s a Bedtime version of Do Not Disturb which dims the lock screen, silences calls and sends notifications straight to the Notification Centre without waking the phone. 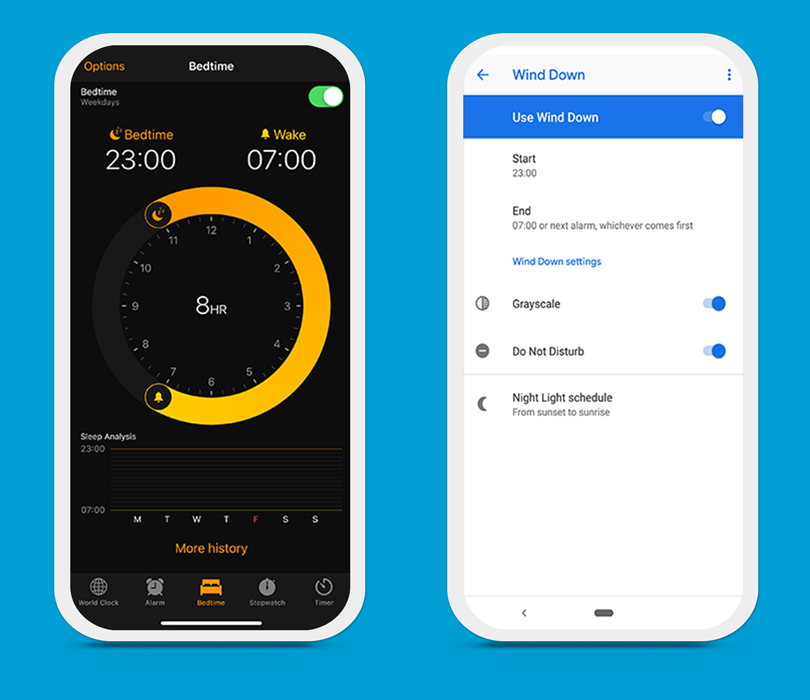 If you have an Android phone it’s called Wind Down and can be found within the Digital Wellbeing app. Once activated it turns the screen greyscale and activates Do Not Disturb until the morning.

Mute the rest of the world

For those of us not blessed with the ability to sleep through a gale force storm noise can play a big part in ruining our sleep whether that’s city traffic or your partner’s snoring.

Rather than using brute force to try and block out the sound, Bose’s Sleepbuds instead mask the outside world. By playing specially altered relaxing soundscapes such as leaves rustling or a babbling brook the Sleepbuds can fully cancel out any distractions. 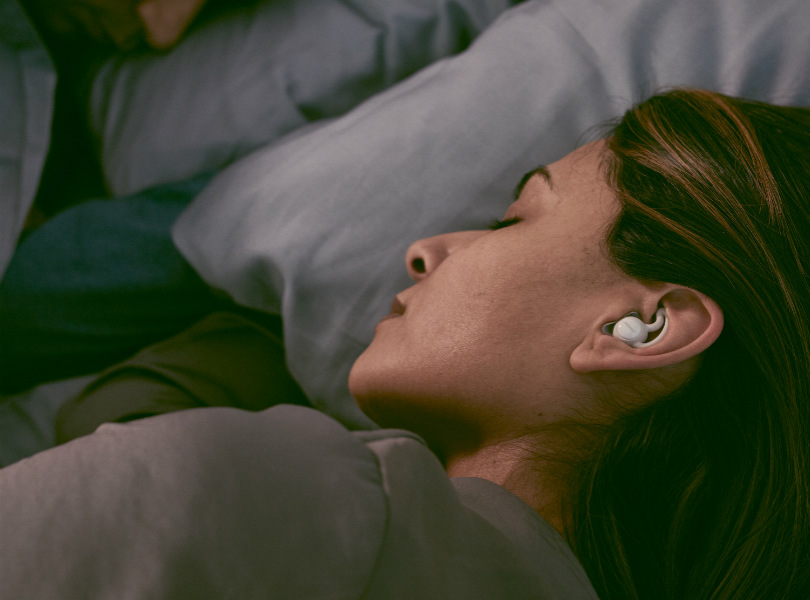 The buds were specifically designed to be worn for long periods of time and before you worry about sleeping through your alarm, the accompanying app comes with an alarm function that gently wakes you up in the morning.

Create your own bedtime soundtrack

For some of us, the easiest way to unwind after a long day is to listen to a playlist, audiobook or podcast.

Audible offers a dedicated Sleep Timer which automatically stops the book either at a set time or at the end of the next chapter. Likewise the BBC Sounds app also contains a Sleep Timer which will stop whatever’s playing after a set amount of time up to four hours.

If you want to listen to music on iPhone, just head to the clock app, set a timer and select Stop Playing under the section When Timer Ends. Alternatively on Android there are a number of apps such as Spotify Sleep Timer which can perform the same function.

Wake up on the right side of bed

Imagine that instead of being woken up by something that sounds like a foghorn every morning, you were instead gently brought into the world by a warm glow.

A lamp like the Philips Hue Wellness does exactly that, replacing your morning alarm with a minimalist light that slowly increases in brightness, replicating the effect of the sun rising over the horizon. 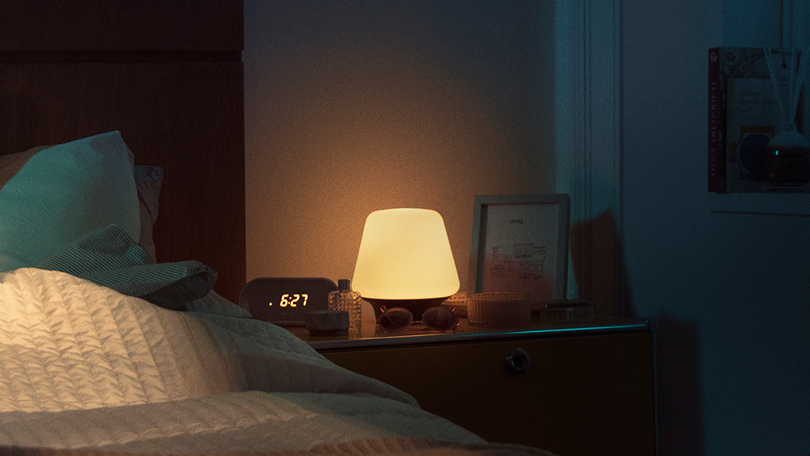 If you have the Philips Hue app you can take things a step further and actually sync the lamp to the movement of the sun so that even if your room doesn’t get the daylight it should, you can still feel like you’re raising with the lark.

Alternatively the Casper Glow Light is a wireless bedside lamp created solely to help you get to sleep and then gently wake you up. Controlling it is as simple as rotating it left or right and because it’s wireless it can even act as a mobile night light for when you have to navigate a Lego-laden floor early in the morning.

Feel prepared for the day ahead

Worrying about the next day can keep your mind occupied and prevent you getting a good night’s rest. To alleviate some of those concerns, a smart clock like the Lenovo Smart Clock can make all the difference when you first drift back into reality. 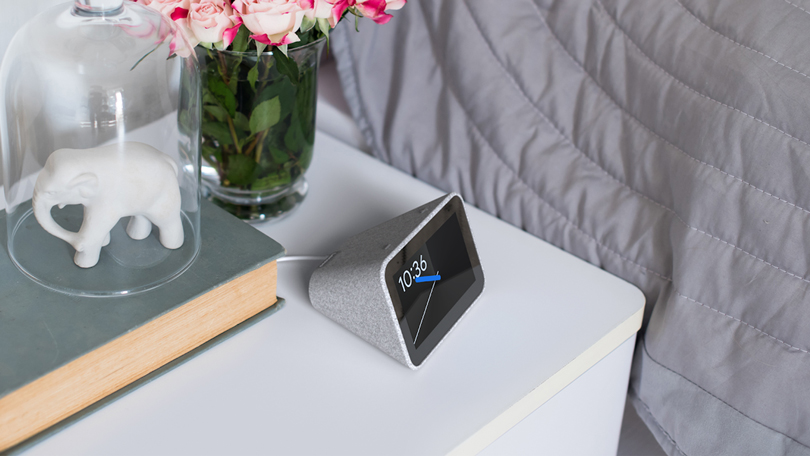 A smart clock is essentially an alarm clock with - in the case of the Lenovo - Google’s Assistant built in. That means it can control all your smart home gadgets and, most importantly, help you prepare for the day ahead.

From the comfort of your bed you can find out the weather, what your commute will be like and what meetings you have coming up all by simply setting up the Good Morning routine in the Google Home app and then saying "Hey Google, Good Morning".