Ring Video Doorbell and Ring Door View Cam: See who is at your front door wherever you are and avoid nuisance callers

The Ring Video Doorbell helps you keep unwanted callers at bay and lets you keep an eye on your front door whether you're upstairs, at work or on holiday.

Smart home technology is changing our domestic lives for the better, allowing us to turn up the heating or turn off the lights using a smartphone or through voice control. It’s not just lighting and thermostats that are now connected to the internet however - your doorbell can be too.

Using a device like the Ring Video Doorbell, you can see who’s at the door - and even speak to them - without getting up from the sofa, or even being in the same house.

[Read more: How technology is changing our homes]

Smart home technology refers to devices that are connected wirelessly to your home wi-fi network. This lets them bring you information from the internet as well as interact with other devices on the same network, including other home appliances and your smartphone or tablet.

The result? A futuristic home in which you can control everything centrally just by speaking or whipping out your phone. You can even control some devices remotely, so if you want to put the hot water on from your office or check that you switched the iron off from the bus, you can.

How does Ring Video Doorbell work?

Ring makes a whole family of cameras that can help protect your home, but at its core is the Ring Video Doorbell. This beams clear high-definition video to your smartphone or tablet, so when someone rings the bell, you can see live footage of them standing outside your house. These images are sent via your home wi-fi network, so make sure you have a robust broadband connection in place.

The Ring Video Doorbell also contains a speaker and microphone which enables two-way audio so you can speak to the person at the door no matter where you are. You don’t even need to be in the house or even in the same country: as long as you can connect to the internet, you can act like you’re just busy and can’t make it to the door.

All of this is then controlled via the Ring app which is available on any smartphone or tablet running Android or any Apple device.

Not only is a video doorbell great for speaking to couriers, neighbours and anyone else who knocks on your door, it will also deter burglars, as they’ll be fooled into thinking the house is occupied even if you're away, which should give you peace of mind.

Ring Video Doorbell 2: Best for ease of use

The best place to start is the Ring Video Doorbell 2 which works either via a battery or hardwired to your home's power system. It's the company's mid-range video doorbell, and provides a livestream from your door either when the bell is pressed or on-demand using the app. 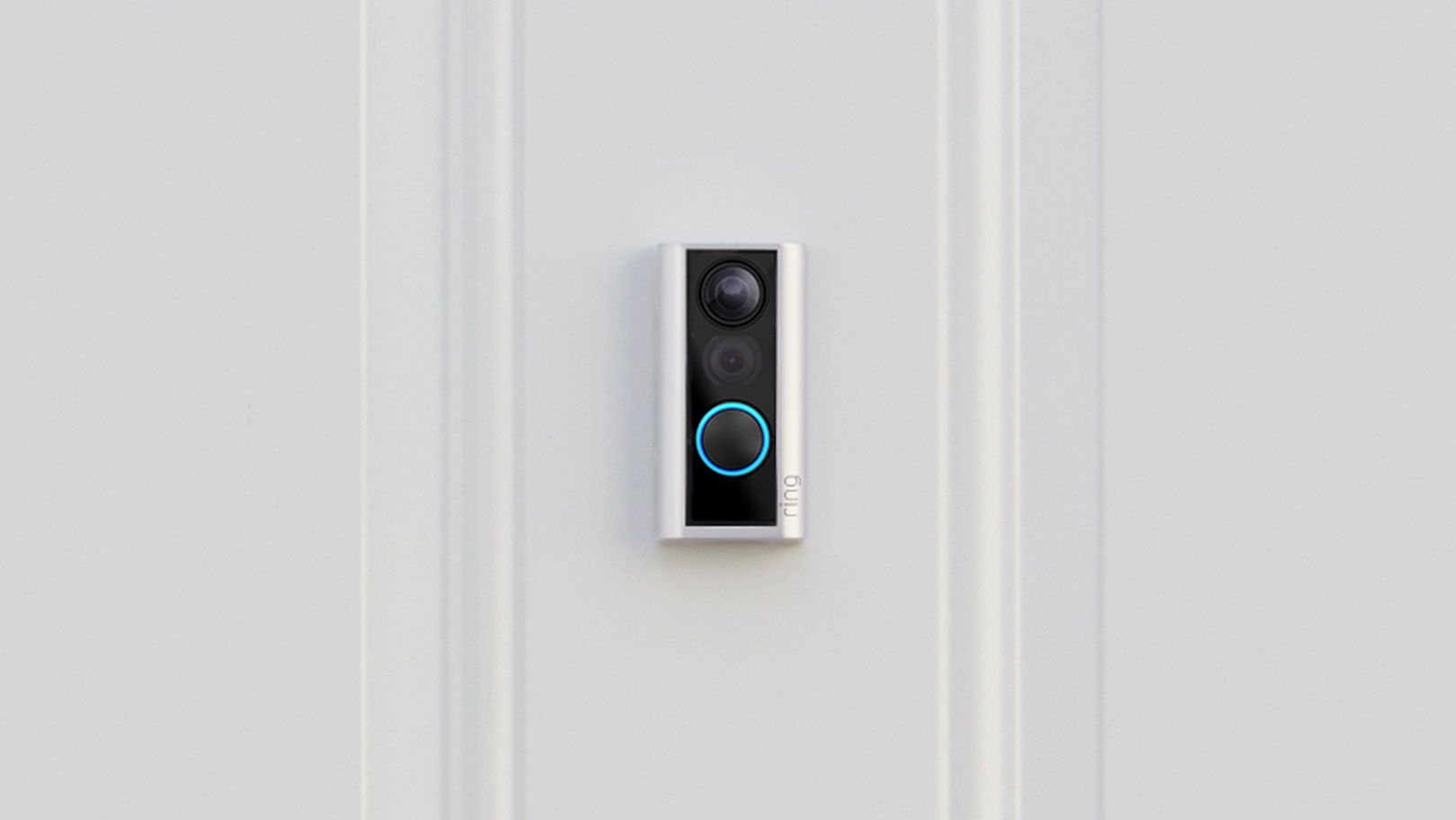 It's one of the simplest video doorbells to use. It costs £179.

Ring Video Doorbell: Best for those on a budget

Althernatively the original Ring View Doorbell gives you many of the same features but in a much cheaper package.

The main difference is picture quality. While the Video Doorbell 2 records footage in 1080p high definition, the cheaper model only records in 720p. The slightly lower resolution means you won't see quite as much detail in the image. Though it's still high definition, which is sharp enough to watch on a phone.

Ring Door View Cam: Best for those with a peephole

Here's something a little different from your usual video doorbell - one designed to double as a peephole. 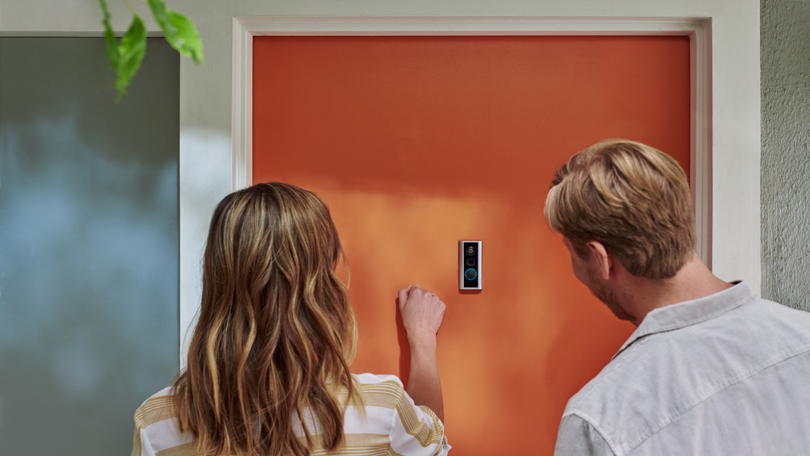 It's designed to fit on any compatible peephole (or spyhole, as they're also known), and has all the features of a video doorbell - two-way audio so you can speak to whoever's at the door, live video streaming, and motion-activated notifications. It senses when someone knocks on your door and lets you know.

And because it's positioned in the mddle of the door instead of to the side, it could give you a better look at who's at your door, depending on your set-up. It's also a great option for anyone living in a flat, where space is more limited.

If you're worried about who's knocking on your door at night, the Ring Video Doorbell Pro is for you. As well as all of the features mentioned above, it has infrared night vision, which is perfect for seeing in the dark. That way, you can see if your late-night caller is just a double-glazing salesman working late, or something more sinister. 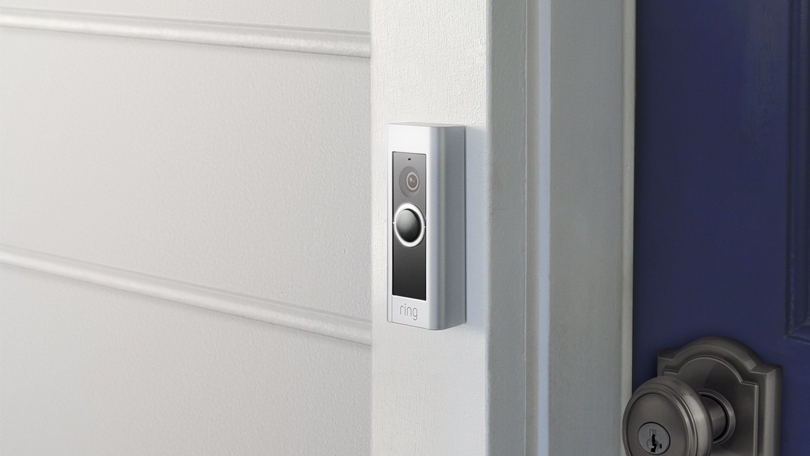 The Video Doorbell Pro is powered by a 24 VAC transformer and comes with a chime, intelligent motion detection and four interchangeable faceplates. It costs £229.

Ring Video Doorbell Elite: Best for those with money to burn

For the ultimate in home security, check out the Ring Video Doorbell Elite. It's powered by an Ethernet cable, giving it the most secure internet connection going. That means it will stay online, stay powered up, and keep streaming the highest-quality high definition video to your phone with no delays.

As you might expect from a pro-level device, professional installation is required. And it doesn't come cheap - at £449, it's one of the priciest video doorbells around. But if you want unrivalled performance, look no further.

Keep an eye on your home with a security camera

As well as making doorbell cameras, Ring also makes a range of indoor/outdoor security cameras such as the Ring Stick Up Cam which can be discreetly placed either indoors in your living room or outdoors overlooking your garden or garage. 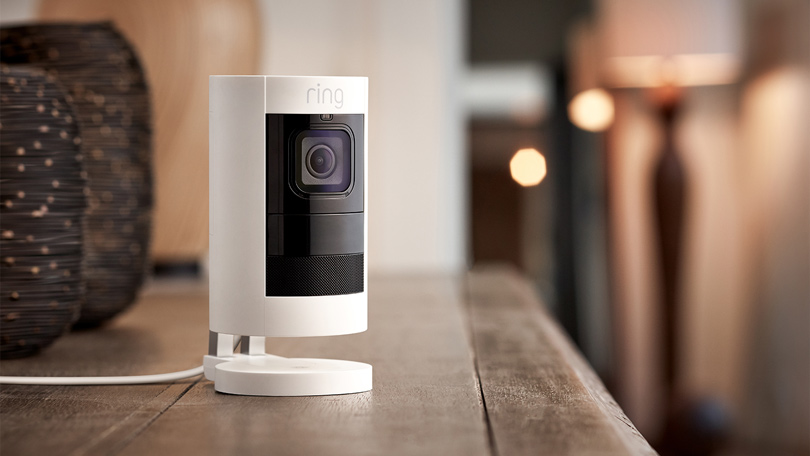 Just like the Doorbell, the Stick Up Cam can beam live video, allows two-way talking and even comes with an anti-burglar siren that can be remotely activated.

How do you install Ring Video Doorbell?

You can replace your existing doorbell with a Ring Video Doorbell in a matter of minutes. First, download the Ring app for Android or iOS and follow the instructions on where to position your router. Switch off the power to your existing doorbell and remove it. Then it’s a simple case of drilling the Ring mounting bracket in place and attaching the wires.

Not replacing an existing doorbell? You’ll need to power your Ring Video Doorbell using its internal battery. To see how to install it, watch this video.

If you're installing a Ring Stick Up Cam and want to mount it on a wall or ceiling follow these instructions. If you just want to use the provided stand, simply place it on a shelf or in a discrete location, make sure it's plugged into a nearby wall socket and then follow the instructions within the Ring app.

Ring's doorbells do work with Alexa, but only on certain Amazon devices with access to a screen. This is because those without screens can't show you who's at the door.

Ring's cameras work with all models of Echo Show, Echo Spot, Fire TV and the second-generation Fire TV Stick. They also work with Fire TV Edition Smart TVs, which are only available in the US at the moment.

To use your Ring Video Doorbell device through Alexa, just say “Alexa, show my front door” and you’ll see a live video feed showing who or what is at your front door.

BT Broadband customer? Log in for your personalised offer