Avoid traffic and accidents, plan your stops and even find the best caravan-friendly routes with these free online route planners

Forget struggling your way around a map, these online route planners make it easy and don’t cost a thing.

Paper maps have their place, but there's a high-tech alternative that's quicker, easier to follow and more convenient - an online route planner.

Not only are they easier to carry around (and don't tear in the wind), they're viewable on a smartphone or tablet. So if you're planning a trip this Easter, check out one of these online route planners to help get you there.

For taking planes, trains and automobiles 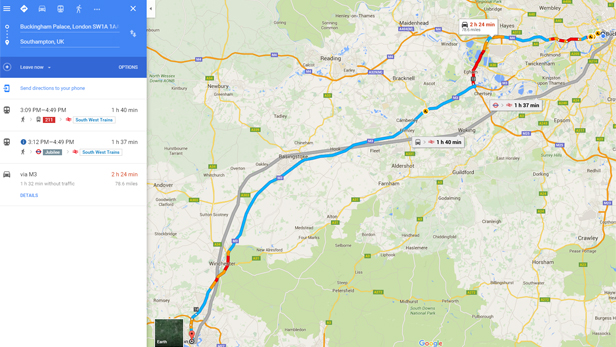 A car is a convenient mode of transport, but sometimes it pays to have options. If it's sunny, maybe it would be nice to walk instead. Or maybe public transport would be quicker, easier and cheaper.

Google Maps lets you choose from a wide variety of modes of transport - including car, rail, foot, bicycle, and air - using one of the simplest mapping layouts around. You can easily select alternative routes from the map, with a number of customisable route options such as avoiding tolls and motorways. You can even add a stop off too if you like.

There are some traffic warnings on the maps, although they’re not incredibly detailed. And you don’t get predicted fuel costs like other sites. 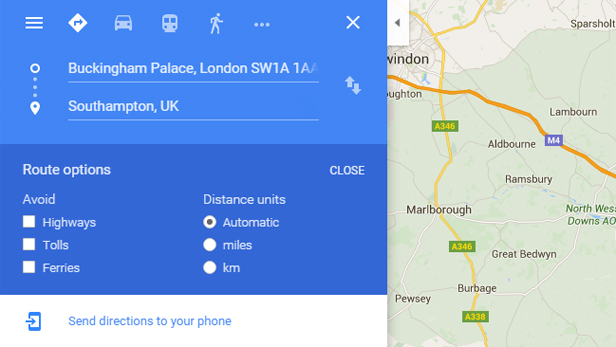 Google will show you suggested places of interest when you zoom in though, including essentials like restaurants and petrol stations.

You can even make a print-friendly copy of your journey, which you can print off at home, if you preferthe feel of a paper map. Though obviously this won't give you traffic updates or speed camera alerts. For those, check out the Google Maps app on iOS or Android.

For making multiple stops on the way 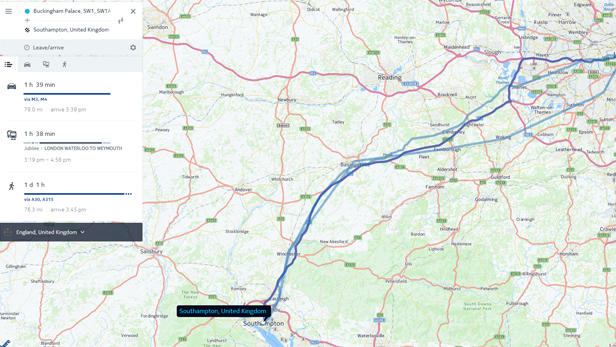 Maybe there's a service station you particularly like. Or you need to stop in to see a relative on the way. In these instances, its handy to set a stop-off, so you don't have to enter multiple addresses while on the road.

Here WeGo is a good alternative to Google Maps, and boasts one unique feature - you can create routes with multiple stops and save them as a named collection. So if you're travelling from Bath to Newquay via Bristol, you can add stops along the way and navigate to each of those in turn. That way, you can set up your journey in advance, and don't have to constantly look up addresses of where you're going along the way.

Its choice of transport methods is a little more limited however, offring just car, public transport and foot. Though you can print a detailed route plan for your journey, albeit without a preview of the map itself. 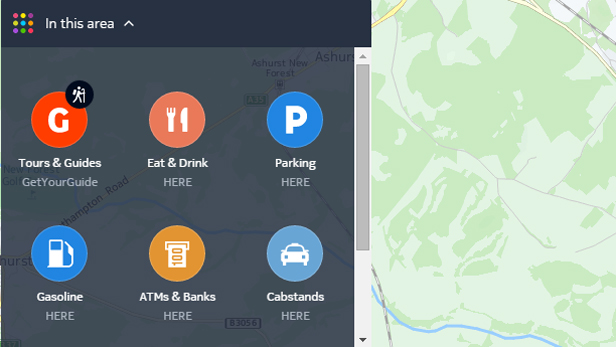 You can use the Near panel to show you an extensive number of amenities nearby, including tours, places to eat, parking, petrol stations, banks, cabstands, places to rent a car and pharmacies.

Fuel costs aren’t provided and traffic alerts are limited, simply providing a status on how heavy its expected to be rather than detailing exactly where.

Again, there's an app to use as a satnav on your smatrphone, and it lets you download maps to use offline as well, which will save you hefty data roaming fees while abroad. It's available for iOS and Android.

It only takes one accident to close all three lanes of a motorway and grind traffic to a standstill. An early warning detection system is vital if you're to avoid these blackspots and arrive at your destination on time.

The RAC's online mapping service shows live incidents provided by the breakdown service's own Accident Car. That means you can easily avoid where the traffic is snarled up, or, if it's unavoidable, at least brace yourself fora long wait.

Worried about the changeable weather? It will tell you whether to expect sun, rain or the dreaded snow.

Routes are limited to just driving or walking, so it's useless if you're taking public transport. But it's something of a driver's dream - the advanced options give you predicted fuel costs and route refinements (such as avoiding tolls). 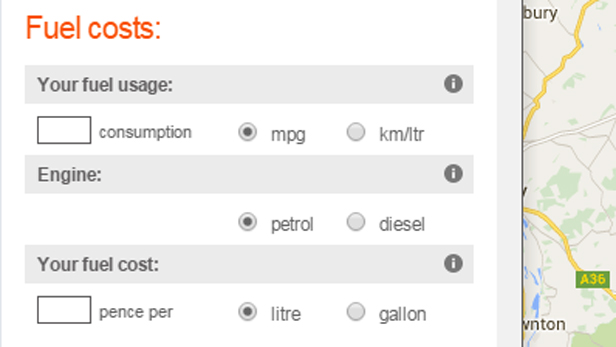 You can set multiple stops along the way, and also highlight garages, National Trust places of interest and hotels provided by laterooms.com.

A print-optimised version of your journey can be made too – or you can email and share it via social media. Prefer to have the app on your phone? Download it for iOS and Android.

Caravaners get a lot of unfair stick, so it's nice to see one service offer something especially for them.

ViaMichelin is great if you’re using a caravan as it’ll suggest caravan-friendly routes. Not many services offer that extra, so it's a nice option to have.

But of course it's not limited to caravans. It lets you plan routes for cars, motorbikes, bicycles or on foot. Like many of the others it lets you block tolls and calculate fuel costs, but in true Michelin style you can also bring up restaurants, hotels and tourist sites – so you can add in a nice stop off on your journey. 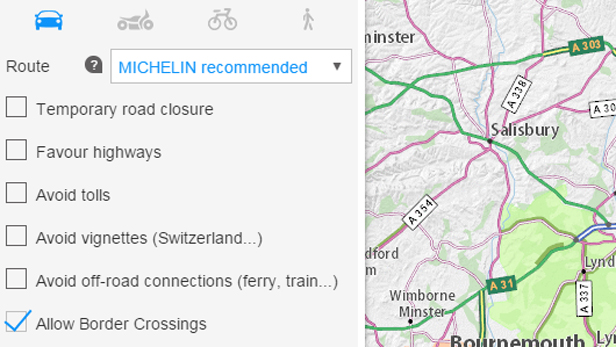 ViaMichelin is also print-friendly and provides detailed traffic impacts that may slow your journey down.

And if you need to make multiple stops you’re in luck, as you can add another six stops to your route.

Of course there's a smartphone app too - find it on Android and iOS.

For dodging the traffic jams 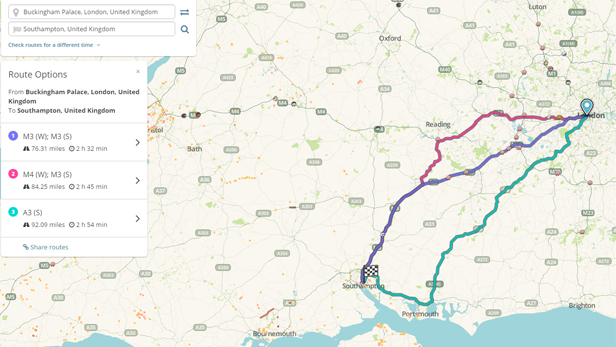 What if drivers up ahead could warn you what the traffic was like? Now they can, courtesy of Waze.

It's aimed purely at those traveling on the road and is one of the best ways to avoid traffic, as it’s powered by its userbase. In other words, anyone using the Waze smartphone app on Android or iOS as they drive contributes real-time information on the roads which is shared with other drivers. That way, you can see where the most traffic is, and - hopefully - avoid those routes.

For this reason Waze’s traffic data is detailed and very up to date. What’s more, you can choose the time you’ll be travelling and it’ll use previous data to predict how the traffic should be. While this is by far Waze’s strength, don’t expect extras like multiple stops, places to get a bite to eat or fuel stop. 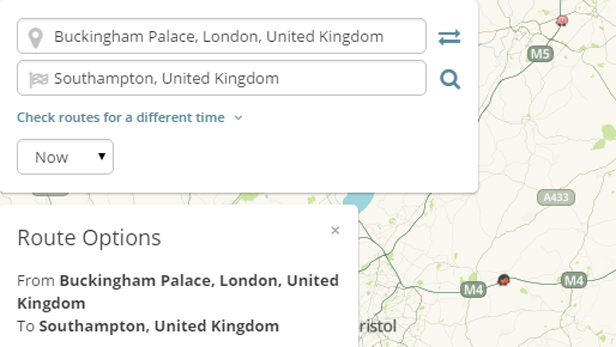 The Waze website lets you prepare your journey in advance using the data from users' smartphones to give you the quickest possible route – however, it only appears to work when calculating a route within the same country (so there’s no luck planning a trip across the continent with your car). Sadly it doesn’t format it for printing so it might be worth getting hold of the smartphone apps if you can too.

Find your perfect mapping app with these brilliant smartphones

Hitting the road? Use free wi-fi where available with our SIM-only deals