Motorola Moto G6 Play: tips and tricks to get the most out of your smartphone

Everything you need to master your new phone, from simple hand gestures to launch camera and torch to a flipping great Do Not Disturb mode.

The Motorola Moto G6 Play boasts a set of features you won’t find on most rival smartphones, like the ability to shrink the screen, gestures to turn on the camera and the torch, and the ability to ignore calls simply by flipping the phone over.

They’re all simple to activate and use, once you know where to look. So join us as we run down the most exciting features of the G6 Play.

Flip the phone for Do Not Disturb 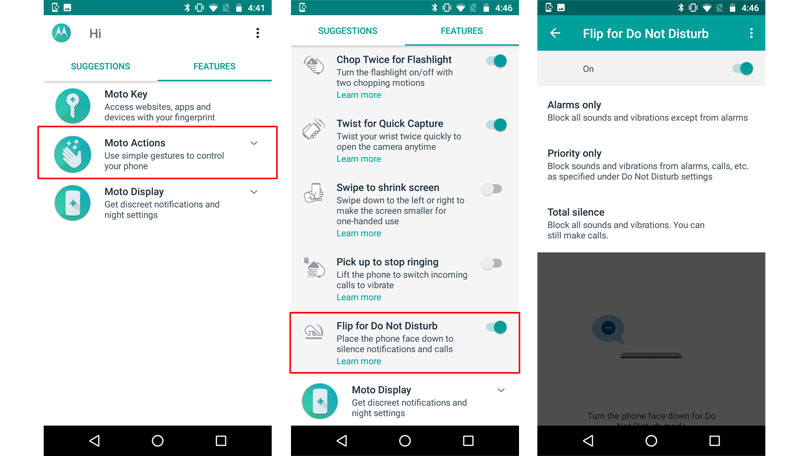 Whether you’re in an important meeting or just engrossed in your favourite TV show, sometimes you don’t want to be disturbed. With the Moto G6 Play, all you have to do is flip the phone over.

To set this up, on the home screen, tap the Moto app, tap Features in top right, then Moto Actions. Scroll down to Flip for Do Not Disturb and toggle it on. Now when you place the phone face-down, it’ll silence notifications and phone calls.

Want to tweak exactly what’s blocked? No problem. Below Flip for Do Not Disturb, tap Learn more and you can choose from a range of options. You can block all sounds apart from alarms, all sounds and vibrations completely, or you can accept calls from specific contacts (family members, for instance).

Take a screenshot without faffing around with buttons

On most phones, if you want to take a screenshot, you have to hold down the power button and volume button at the same time – it’s fiddly, and invariably means you’ll have the volume level indicator appear on screen, messing up your screenshot. But there is a much simpler way.

The G6 Play lets you take a screenshot by just pressing the screen with three fingers. It’s much easier, and means the volume indicator level won’t make an appearance in any of your screenshots.

Here’s how it works.

To set it up, open the Moto app, then tap Features > Moto Actions and toggle Quick Screenshot on. Now whenever you want to take a screenshot, just tap and hold anywhere on the screen with three fingertips, all spread slightly apart. The camera shutter will sound, and your screenshot will be taken. And that’s all there is to it.

Get photo-ready with a flick of your wrist 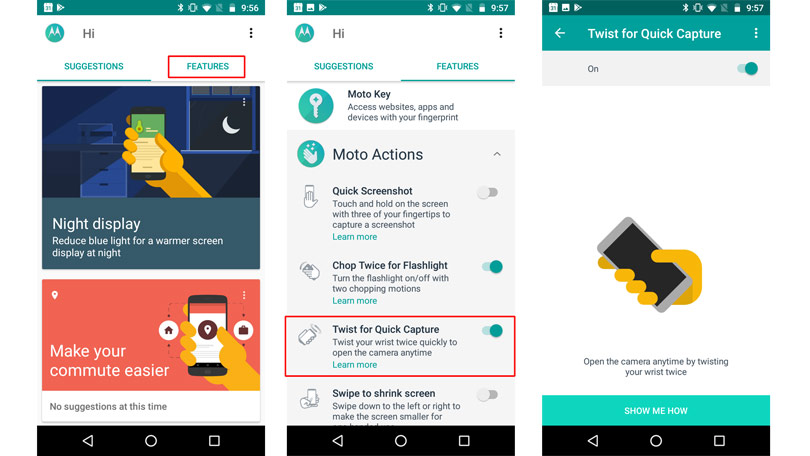 Great photos aren’t necessarily about fantastic framing and perfect lighting. A lot of the time it’s just about capturing the moment, and you can’t do that if you’re struggling to enter your PIN code in order to unlock your phone.

Thankfully there is a much quicker way of opening the camera app. All you have to do is hold the phone and flick your wrist twice, as if changing a lightbulb.

But first you need to enable the feature. To do so, open the Moto app, tap Features - Moto Actions and toggle on Twist for Quick Capture. Now that action will open the camera app, no matter what you’re doing.

Want to snap a selfie? No problem. The same action flips between the rear and front cameras.

Use the torch, chop chop 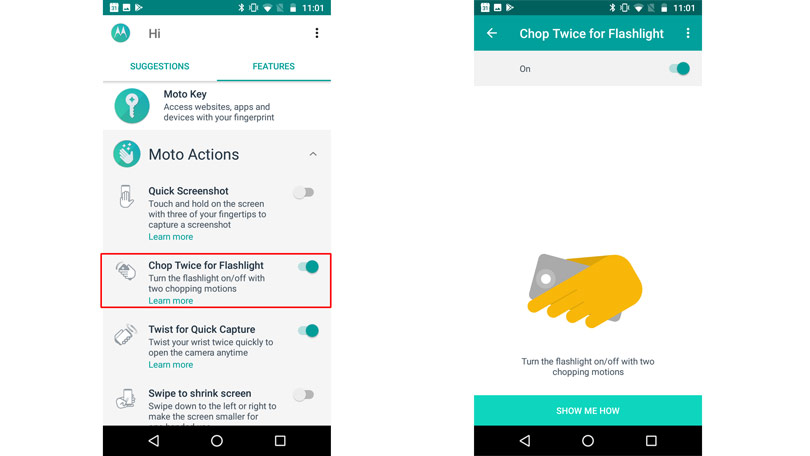 The torch can also by activated with a simple hand gesture, in this case a chopping action.

To turn on the feature, open the Moto app, tap Features - Moto Actions and toggle on Chop Twice for Flashlight.

Now all you have to do is chop twice to turn on the torch – the action is a bit like a short, quick handshake, or fast little karate chops. Like the Quick Capture feature, it works no matter which app you’re using at the time, so if there’s a power cut while you’re looking at your finances in a banking app, you’ll be able to quickly and easily fire up the torch.

Use two apps at once

Sometimes you want to do two things at once. Maybe it’s browsing your calendar while watching an episode of your favourite show, or scrolling through a to-do list while on a video call. Well now you can, using split screen mode.

To open a second app, press and hold the recent apps button (the square icon in the bottom-right of the screen). The app that was already open shrinks to occupy just the top half of the screen, while whichever new app you open will fill the bottom half.

You can turn the phone on its side to use split-screen mode in landscape orientation, too, to view the two apps side by side. 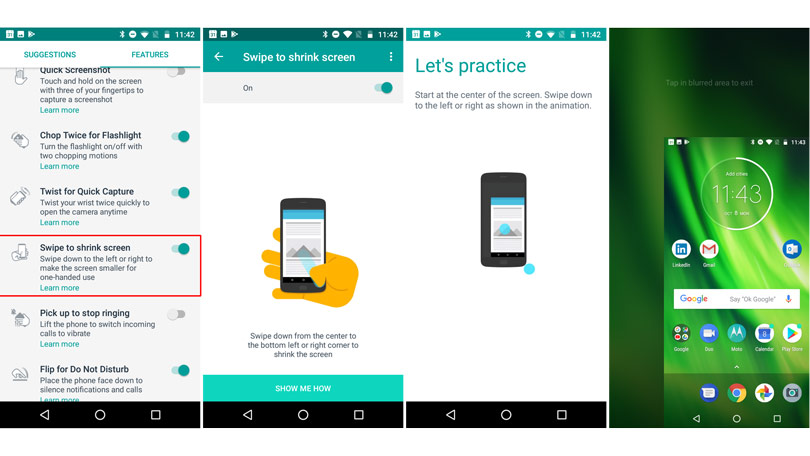 The G6 Play is quite a sizeable phone, and if you find yourself stretching your fingers to reach the top of the display, there is a way to make it more manageable – shrink the size of the screen.

Open the Moto app, tap Features - Moto Actions and toggle on Swipe to shrink screen. Then any time you swipe from the middle of the screen to the bottom left or right corner, the screen will shrink to only take up that corner.

It brings all the icons within easy reach, and makes the phone easier to use. You can open pretty much any app in this mode, and they too will only take up that corner of the screen. 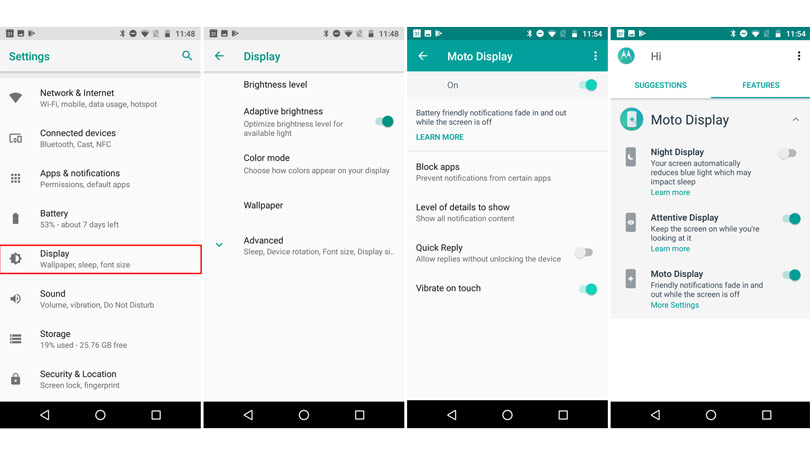 The screen is your window into the phone, so it makes sense to personalise it to your tastes.

Open Settings - Display and you’ll see a host of options. Adaptive brightness optimises the screen’s brightness level depending on your surroundings, while Colour mode lets you adjust how colours appear - choose between warm, neutral or cool. You can adjust the wallpaper too, and the font size to make it more legible.

More advanced features can be found in the Moto app. To view these options, open it and tap Features - Moto Display.

Get the Motorola Moto G6 Play on BT Mobile