At home or on-the-go: How to watch BT Sport on your TV, smartphone, tablet and more

From the BT Sport app to Google Chromecast, here are all the ways you can enjoy all the events BT Sport has to offer.

And not only is there a huge choice of events to watch, there are also many ways to enjoy your favourite sports. Here are all the ways you can enjoy BT Sport at home or on-the-go.

1: Want to watch anywhere? Use the BT Sport app

The BT Sport app is the easiest way to watch your favourite sport on the go, as long as you’ve got a valid BT Sport subscription and BT ID.

Available for Android, iOS or Windows 10 phones and tablets, the award-winning app is packed with features that let you experience live sport in a totally different way. 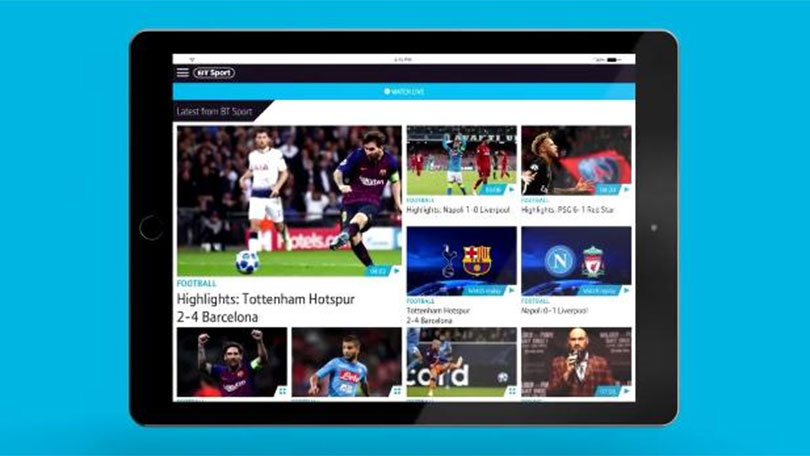 Replays from multi-camera angles, goal alerts and an interactive timeline to replay key moments are just some of the brilliant features of the BT Sport app.

BT Sport also made broadcast history during the Champions League final between Tottenham and Liverpool by broadcasting the coverage in High Dynamic Range (HDR).

Remember, if you aren’t watching the BT Sport app on your home wi-fi or connected to a BT Wi-fi hotspot, you will use data, so keep an eye on how much you are consuming.

BT Sport subscribers can watch through their set-top box on the BT Sport channels.

However, earlier this year we also introduced a big-screen app that enables subscribers to watch in more ways than ever on Xbox, Apple TV, PlayStation 4 and for the first time on Smart TVs, thanks to a partnership with Samsung.*

To start using the app, search for BT Sport in the Xbox Marketplace, Samsung App Store, PlayStation Store or Apple App Store. Once downloaded, you can log in using your BT ID.

It you’ve got a Samsung TV (2015 models onwards) in your living room and an Xbox or PlayStation in your bedroom, you can install the app on both devices, but you can only watch a maximum of two live streams at the same time.

The big-screen app also features a huge collection of on-demand content and highlights, so you can always catch up with your favourites events and shows if you are unable to watch them live.

TV listings will be added later this year, along with support for BT Sport 4K UHD.

If you subscribe to the BT Sport app, you can watch it on a big-screen TV using Google Chromecast.

Chromecast plugs into your TV and lets you stream what is on your smartphone, tablet or laptop.

It’s very simple to use. Make sure your phone and Chromecast are connected to the same wi-fi router, then on the BT Sport app tap the screen icon and the app will ‘cast’ what’s on your smartphone to your TV.

What’s great about Chromecast is that you don’t need an internet-connected TV as Chromecast provides the connection: just plug it into a spare HDMI port of any TV, set it up and start watching.

Chromecast is versatile, too.

You can take the Chromecast out of your living room TV, put it in your bedroom TV and carry on watching.

You can even watch at a friend’s house as long as the Chromecast and your phone are on the same network.

For the closest thing to a match experience at home, you can watch certain matches in VR360 using the BT Sport app.

If you’ve not tried VR before, give it a go – you’ll experience a match from a totally different point of view.

In the BT Sport app look for the ‘360 Live’ icon to find out if a game is available in VR360. Some matches will let you experience the live match in VR, where you can choose your viewing position, (depending on the camera angles available), while other games will have VR360 highlights.

For the most immersive experience, use a VR headset such as Google Cardboard, which you slot your smartphone into. If you don’t have a headset, you can still try it by holding your phone in front of you in ‘Smartphone View.’

Find out more about the BT Sport big-screen app

Not got BT Sport? Find out how to sign-up