Voice controlled TV: Can it replace your remote?

Voice control has gone from flashy gimmick to virtual butler, but is it worth shouting about? We tested Samsung Voice Control to find out.

Voice control is a wonder of the future that has always seemed to be just around the corner. In the last couple of years, it has become a mainstream feature in smartphones and homes.

There are places where voice control makes perfect sense, like telling Google Maps where you want to go while you’re driving, or asking Alexa to set a timer while you’ve got your hands full in the kitchen. The TV isn’t an obvious choice when it comes with a simple control system: the remote control. We decided to test drive Samsung’s TV voice control tech with the stunning Samsung Series 8 Ultra HD HDR TV, to see if it’s time to ditch the remote.

[Read more: What is a Smart TV and what can it do for me?] 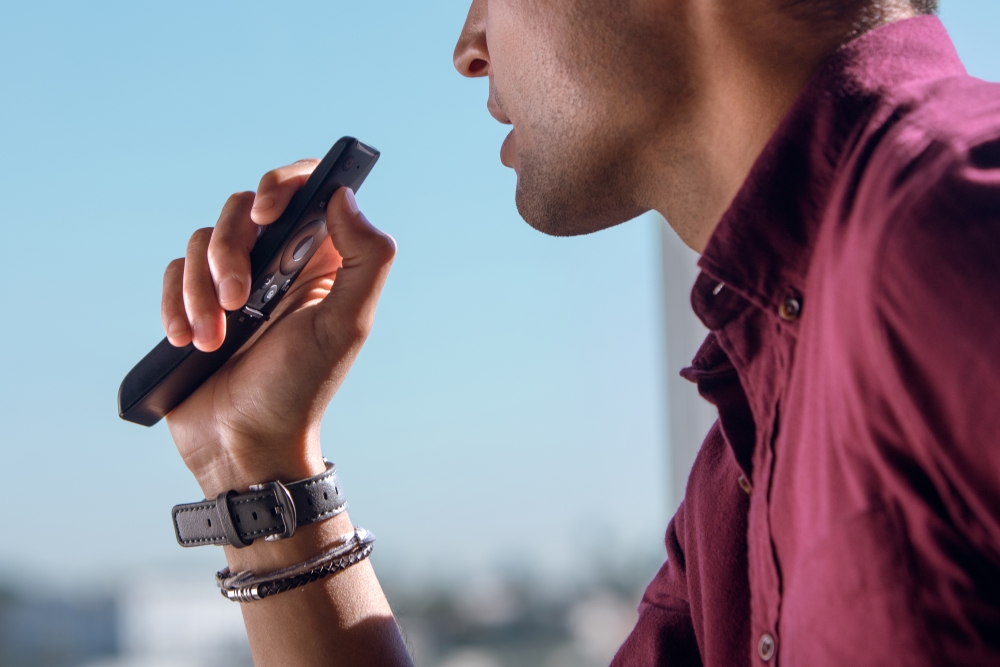 How do voice-controlled TVs work?

Almost every voice control system records your commands and sends them via broadband to a super-computer that’s powerful enough to understand a human voice. When it hears an instruction it understands, it puts it into action - if it can.

All of this happens in a few seconds, even if all you sometimes get back is: “I’m sorry, I didn’t understand that.”

Accents are a matter of training, but natural language is a much harder problem. Most people don’t speak in the way that engineers build TV software, they say “I want to watch Holby City”, not “Search for Holby City”. No-one wants to learn a special language to speak to their TV.

Several other TV companies use Google’s Android TV, including B&O, Hyundai, LG, Philips, Sharp and Sony. This provides voice control through the Google Assistant in your Android or iOS smartphone. LG also has a different voice control tech in some TVs, called ThinQ. Amazon’s Alexa assistant is also being integrated into 2018 TVs from Hisense, LG, Sony, and Toshiba.

The arrival of brands like Hisense and Toshiba in the voice-control TV market has pulled prices out of the premium range into the sub-£500 bracket.

[Read more: How the Connected Home will change the way you live]

How to set up and use Samsung TV voice control

Instead, you press the microphone button on the remote control and hold it down while you speak your commands into the remote, holding it like a microphone.

You can also use your Android or iOS phone as a voice controller, through the Samsung Smart Things app.

You’ll hear a beep when your TV is ready to listen, with a cute on-screen prompt, such as “I’m listening” or “We’re live”. As you speak, it types your words on-screen and a wavy line across the bottom of the TV moves in time with your voice. So far, so Knight Rider.

The microphone button also gives access to a voice command guide, which shows what you can do and has a tutorial (although it’s well-hidden and doesn’t include a video). 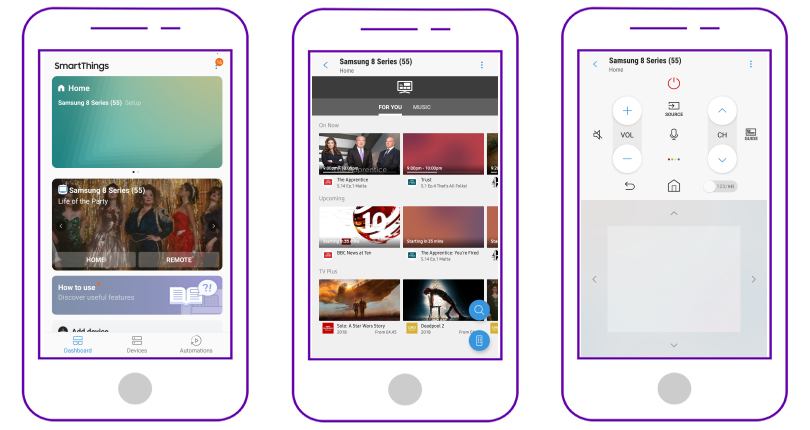 What can you do with Samsung TV voice control?

On the TV, you can change channels, select different sources like a Blu-ray Player or BT TV or launch an app like All 4 or the BT TV app.

Settings like volume, the picture mode or the brightness can also be adjusted. And you can turn the TV off.

The most useful feature - by far - is search. You can search for TV shows across your TV channels (up to seven days ahead) and in YouTube.

You can also use it to control the TV Guide, skipping forward to tomorrow and through the week. You can set reminders, and if you’ve connected a USB hard disk, you can also set up recordings when a programme is highlighted.

Many apps can also be controlled by voice, including BBC iPlayer, YouTube and the built-in media file player. These commands are limited to play, pause and fast forward/rewind.

The TV can also control some other devices through the HDMI cable - for example, to change the volume of your soundbar, so your voice commands will do that too.

There are voice controls for Samsung SmartThings devices like light bulbs and door locks, which connect through the Smart Things app, but we weren’t able to test these commands.

[Read more: How to work out the best screen size for your home]

What can’t you do with Samsung TV voice control?

There are some limits to voice control.  My accent isn’t classic BBC newsreader, but it isn’t strong, but I had to speak very precisely for the TV to understand some commands, in a quiet room, which was a little frustrating.

When changing channels, BBC One HD was not recognised and asking for ITV 1 brought up a list of all the ITV channels. You need the remote to select a channel, unless you request it by number.

The same issues comes up with search: you need to highlight a result to use it, and even a simple command like “Play this” or “Record this” doesn’t deliver an action. The remote is very much required.

Some apps, like Netflix, don’t accept voice commands and block all other voice controls while they’re active. YouTube is the only app that shares its listings, so you won’t see iPlayer if you ask for Doctor Who, for example.

You can’t rock up to the living room and ask your TV to turn on - because it can’t hear you or connect to the app when it’s turned off. 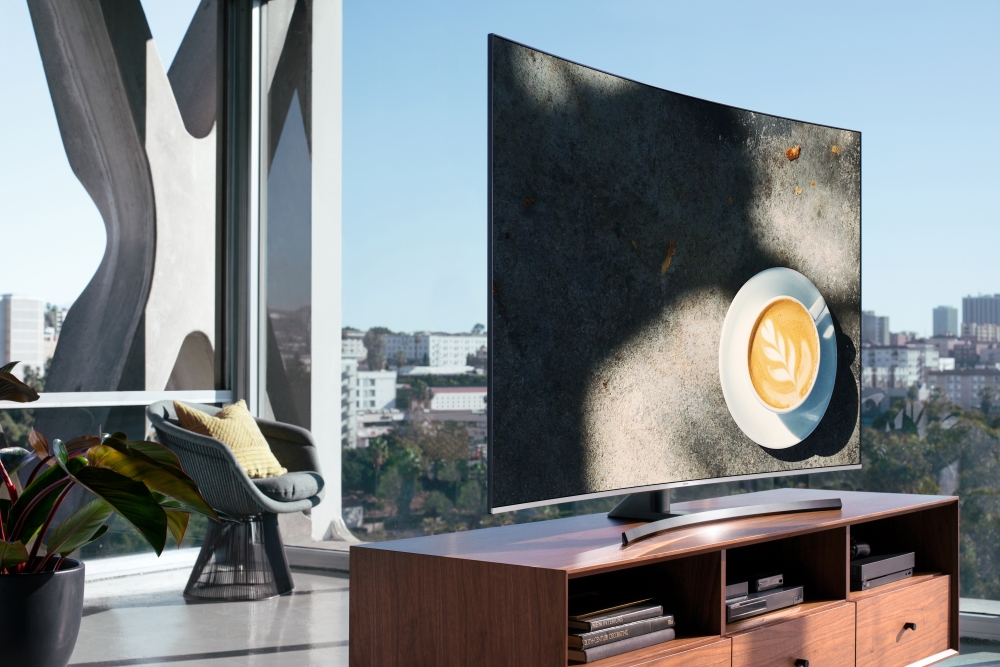 Is it time to ditch the remote for voice control?

You have to pick up the remote and press a button to use voice control, so it is most useful when a voice command can do the work of several button-presses.

The potential to control other smart devices in your home while you’re watching TV is a big step forward, even if it’s turning down the lights.

On-screen search is always tedious when you have to spell things out on the screen using the remote, so this is an easy win for voice control. It’s especially good when you can follow it with an action like playing a video on YouTube.

At the same time, it's not quite advanced enough yet with natural language - you can’t just ask “When is Top Gear on?” or “What’s on ITV 1 tomorrow night?”.

Samsung Voice Control is an interesting extra, but our remote control won’t be gathering dust just yet. Samsung’s Bixby in its phones seems much better at understanding everyday speech instead of a specific list of commands, and the upgrade could be a game-changer for controlling your TV.