TV screen technology throws up a confusing mix of initials and terminology. In this TV tech jargon buster, we explain the engineering behind today’s flat-screen TVs.

Television technology can be a bewildering world of technical terms, abbreviations and the acronyms beloved of engineers. TV manufacturers like to muddy the waters by adding their own brands into the mix and insisting on using these instead of industry-standard terms.

As TV manufacturers race to produce the biggest, thinnest and cheapest flat screens with the best picture quality, we decode the terms and acronyms that you'll come across in your search for your next TV.

What is LCD? (Liquid Crystal Display)

The oldest flat-screen technology, LCD panels are made up of millions of cells of liquid crystals, sandwiched between two sheets of polarising material, with red, green and blue filters to create colour.

They switch from black to clear very fast when an electric voltage is applied, like a camera shutter opening and closing to let through light from a backlight behind. 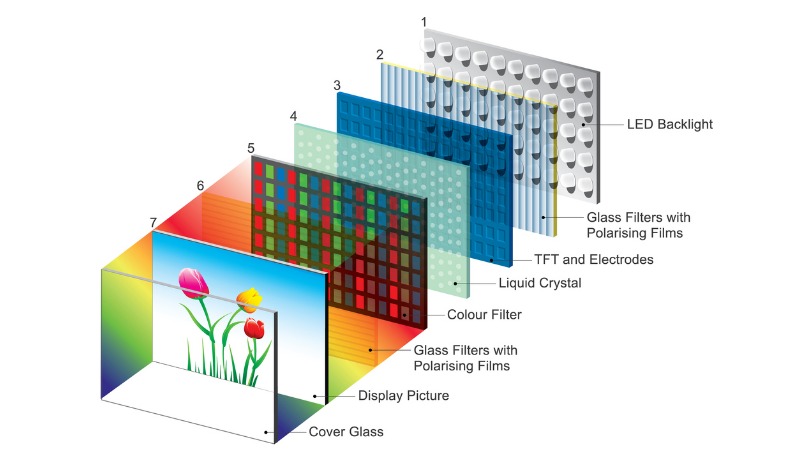 What is LED? (Light-Emitting Diode)

Early LCD screens used fluorescent backlights that illuminated the back of the LCD panel evenly. LEDs are tiny, bright lights that allow TVs to be made thinner, lighter and with smaller bezels around the screen. LEDs also use less power than the old flourescent lights, and contain fewer polluting chemcials like mercury.

Edge LEDs are mounted around the LCD panel and allow for very thin screens, but can make the panel brighter around the sides and dimmer in the middle.

Full array LEDs are mounted behind the LCD and create a very bright, even light that can be precisely controlled for new features like local dimming (see below).

White LEDs tend to have a blue tinge. This affects the final colours which appear on the screen, prompting manufacturers like Samsung to introduce new technology like quantum dots.

What is local dimming?

With LED TVs, the lights behind the LCD panel can be turned on and off individually so that different parts of the screen are brighter and darker. This improves the contrast in dark scenes but allows bright parts of the picture to be fully lit up.

Early local dimming TVs sometimes fell victim to smudges of light and dark because the LEDs were spaced too far apart or they were controlled in groups. They can now be packed so closely together that the LED array has almost the same resolution as the LCD panel in front of it, and turned on and off individually.

Some Edge LED TVs create local dimming through light pipes which guide the illumination behind the LCD panel, but they are usually less effective than a full array LED. 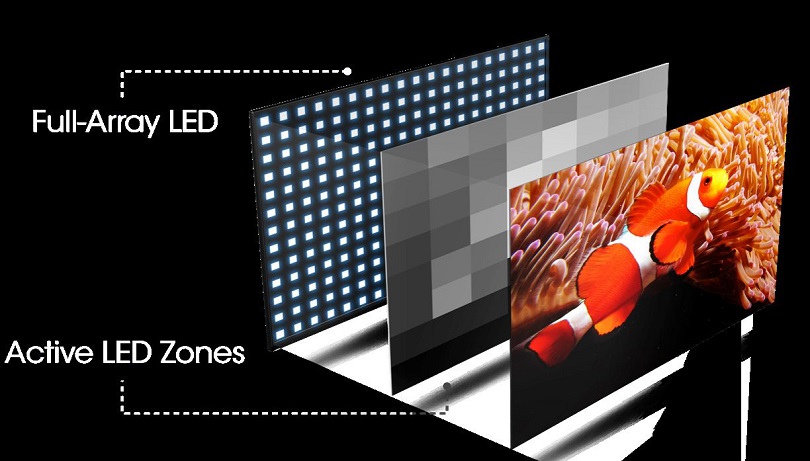 What is QLED? (Quantum dot LED)

Exclusive to Samsung, QLED employs tiny chemical dots that glow in very precise colours when you shine a light on them, and are combined together to create a pure, very bright white light. This shines through a conventional LCD panel and allows both richer colours and a brighter picture.

In a QLED TV, the quantum dots are triggered by an LED panel but this light, with its blue tinge, is not part of the picture you see on the screen.

TV experts confirm that QLED is brighter than OLED and the colour palette is very rich, but the use of an LCD panel to control the light makes it very hard to achieve pure blacks and precise dark areas, even with local dimming.

What is OLED? (Organic LED)

OLED is a new TV technology which uses an array of LEDs that create both light and colour, so they’re richer and more vivid than combined LCD and LED arrays.

Since they create their own light, each OLED can also be turned off so that the screen’s contrast is much better too. The individual OLEDs can be packed together more tightly than LCD cells, and the panels are very slim and light because there are fewer layers. OLED also uses a lot less power than an LCD screen.

Unfortunately, huge OLED displays have proven very hard to make, which is why they’re still so expensive. It’s a big challenge, but most of the big TV brands other than Samsung are betting on OLED for the next generation of Ultra HD TVs.

Got broadband with us? Add BT TV